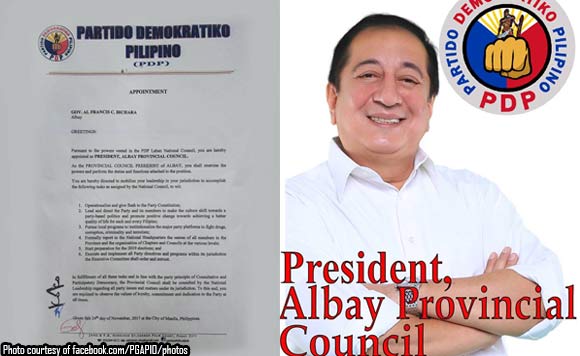 0 569
Share
Want more POLITIKO News? Get the latest newsfeed here. We publish dozens and dozens of politics-only news stories every hour. Click here to get to know more about your politiko - from trivial to crucial. it's our commitment to tell their stories. We follow your favorite POLITIKO like they are rockstars. If you are the politiko, always remember, your side is always our story. Read more. Find out more. Get the latest news here before it spreads on social media. Follow and bookmark this link. https://goo.gl/SvY8Kr

Governor Al Francis Bichara has been appointed as the President of the PDP Albay Provincial Council.

With the appointment, Bichara is expected to lead all party members in the province to “solidify the local government landscape in promoting positive change towards achieving a better quality of life for each and every Albayano.”

“Another responsibility placed on Bichara’s shoulders is to pursue local programs which shall institutionalize major party platforms to fight drugs, corruption, criminality, and terrorism,” the province said.

Bichara was one of the earliest supporters of then Davao City Mayor Rodrigo Duterte when he ran as President.

“The appointment cemented the position of Governor Al Francis Bichara as a stalwart of the PDP and one of the earliest supporters of President Rodrigo Duterte,” said the province.

Duterte even acknowledged recently that Bichara as one of the few local politicians who aligned with him and supported him in his bid for presidency.

“Duterte said that during his national campaign he didn’t know many of the local leaders and was thankful of the valuable support of the few that showed their support to his campaign,” the province said.

Gov. Bichara said that he is thankful and honored by the trust and confidence given to him by the party.

The Partido Demokratiko Pilipino–Lakas ng Bayan, or the PDP-Laban is the ruling political party in the Philippines.

President Duterte sits is as the National Chairman of the party.