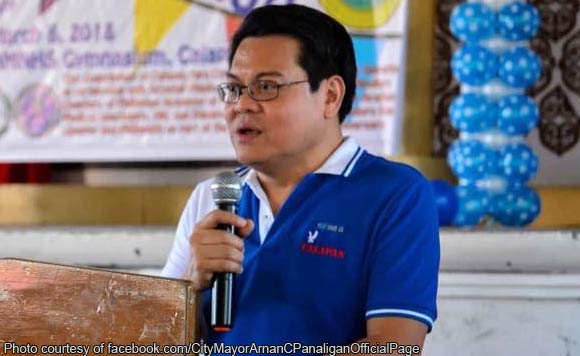 0 484
Share
Want more POLITIKO News? Get the latest newsfeed here. We publish dozens and dozens of politics-only news stories every hour. Click here to get to know more about your politiko - from trivial to crucial. it's our commitment to tell their stories. We follow your favorite POLITIKO like they are rockstars. If you are the politiko, always remember, your side is always our story. Read more. Find out more. Get the latest news here before it spreads on social media. Follow and bookmark this link. https://goo.gl/SvY8Kr

Calapan City Mayor Arnan Panaligan has led the distribution of land titles to the member-beneficiaries of the Community Mortgage Program (CMP) in San Jose Tibag Pamayanan Association in Brgy. Balite.

The distribution is part of the Housing Opportunities Towards People Empowerment (HOPE) program of the City under the administration of Panaligan.

The HOPE program is the flagship housing project of Panaligan which was started almost 21 years ago during his first term as Calapan mayor.

“This program was first initiated by Mayor Panaligan during his first term in 1997. CMP is one of the component programs of HOPE or Housing Opportunities Towards People Empowerment, the flagship program of the City Government in Housing, Settlements and Land Tenure,” it added.

The president of the Socialized Housing Finance Corporation, Atty. Arnolfo Ricardo Cabling, was also present during the awarding of titles.

Panaligan believes that housing and land tenure programs are “effective anti-poverty programs that will improve the standard of living of the people.