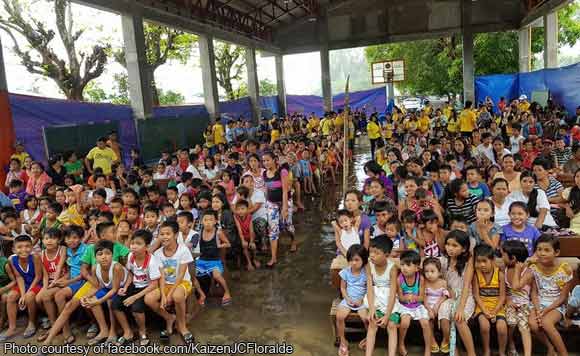 0 552
Share
Want more POLITIKO News? Get the latest newsfeed here. We publish dozens and dozens of politics-only news stories every hour. Click here to get to know more about your politiko - from trivial to crucial. it's our commitment to tell their stories. We follow your favorite POLITIKO like they are rockstars. If you are the politiko, always remember, your side is always our story. Read more. Find out more. Get the latest news here before it spreads on social media. Follow and bookmark this link. https://goo.gl/SvY8Kr

At least 14,520 families or 54,657 persons housed in various evacuation centers were allowed to return home Tuesday after Mayon Volcano’s alert status was lowered to Alert Level 3 (decrease tendency towards hazardous eruption) by the Philippine Institute of Volcanology and Seismology (Phivolcs).

Daep said, “as a standard practice the decampment procedure was approved by Phivolcs based on the level of unrest the volcano has exhibited.”

Daep, in an interview, said about 2,665 families or 10,836 persons would still remain in their respective evacuation center until Phivolcs declares anew the lowering of the alert status to Level 2.

The remaining evacuees still seeking refuge in the 13 evacuation centers are those whose houses are in the 6-km PDZ covering 11 villages in the towns of Daraga, Camalig, Malilipot, Guinobatan and Tabaco City, Daep said.

The decampment procedure has decongested about 82 percent of the 61 designated evacuation centers in the towns of Malilipot, Bacacay, Sto Domingo, Daraga, Camalig, Guinobatan and the cities of Tabaco, Ligao, and Legazpi.

The thousands of evacuees that were allowed to return home has spent 52 days in various evacuation centers, according to Daep.

Daep said that in previous Mayon eruptions, evacuees stayed in the evacuation center for four months in 1984; two months in 1993 and three months in 2014.

Task Force Mayon was formed to relocate the thousands of families whose houses are in the 6-km PDZ.

The task group would review whether these villagers indeed have ownership titles to the land they reportedly claim as theirs.

Daep said, “initial finding indicates that some of the owners only show their tax declaration certificate, not the original land title furthermore these lands are classified as agricultural, not residential.”

The group will also recommend a “buy-out scheme” where the local government may expropriate or buy the land owned by villagers that are in the 6-km PDZ.

Phivolcs resident volcanologist Ed Laguerta, in an interview, said the agency has already submitted a position paper to the Sangguniang Panlalawigan strongly recommending the passage of a provincial ordinance prohibiting any human activity inside the 6-km PDZ.

“There ’s a need for an ordinance that would make the prohibitive zone as a No Man’s Land thus solving the perennial problem of stubborn villagers either living or doing farming choirs in the designated danger zone, ” Laguerta said.

Laguerta said it took the agency 10 days of close observation period after which it recommended the lowering of Mayon’s alert status from level 4 to 3.

He stressed that when the volcano showed signs of abnormality it raised alert level 2 in Jan. 13 followed by level 3 the following day (Jan. 14) and on Jan 22, Alert Level 4 was raised after the volcano erupted spewing 5-km cauliflower type ash laden cloud.

Laguerta said that Mayon volcano has so far expelled 63 million cubic meters of molten lava since it erupted last January 13.

Phivolcs on Tuesday morning lowered to Alert Level 3 the warning on Mount Mayon as the agency noted a general decline in eruptive activity on the volcano.

“Mayon Volcano’s condition in the past week has been characterized by a general decline in unrest,” a Phivolcs bulletin released at 8 a.m. said.

Volcano watchers monitored moderate seismicity and degassing, deflation of the edifice and a decrease in eruptive activity at the summit crater.

Despite the lowering of the alert, the Phivolcs said residents and people should still be “strictly prohibited” from the 6-kilometer permanent danger zone and the seven-kilometer-radius extended danger zone.

People living near these danger areas were advised to observe precautions associated with rockfalls, pyroclastic density currents and ashfall. (PNA)