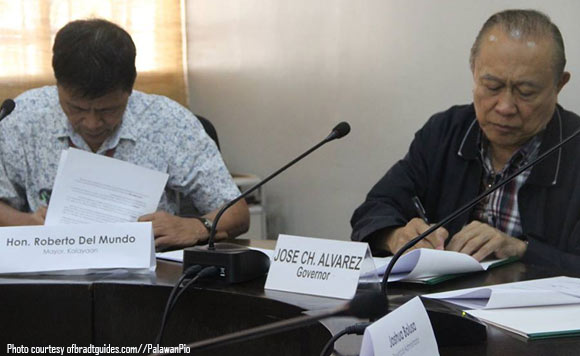 0 519
Share
Want more POLITIKO News? Get the latest newsfeed here. We publish dozens and dozens of politics-only news stories every hour. Click here to get to know more about your politiko - from trivial to crucial. it's our commitment to tell their stories. We follow your favorite POLITIKO like they are rockstars. If you are the politiko, always remember, your side is always our story. Read more. Find out more. Get the latest news here before it spreads on social media. Follow and bookmark this link. https://goo.gl/SvY8Kr

Palawan’s police force has found an ally in the provincial government, which is willing to spend for their hospital and medical expenses if they get wounded while enforcing the law.

“Don’t be afraid to do your tasks and responsibility of protecting the people against criminality, the provincial government will help you,” Palawan Governor Jose Alvarez told Senior Supt. Gabriel Lopez, of the Palawan Police, during the celebration of their 27th Founding Anniversary at Camp Higinio Mendoza, Barangay Tiniguiban Monday afternoon.

Alvarez, who lauded their performance, also urged them to fully support his administration’s tourism initiatives.

“Let us protect our tourism industry because it is the key to Palawan’s development. The mines are about to be saturated, our fish stock is declining, but our tourists and guests, they are arriving in numbers now, and we need to protect their safety and security,” he added.

During the ceremony, Lopez boasted that the provincial police has caused Palawan’s crime index to decline by 20.6 percent last year, which he attributed to increased visibility and operations to fight illegal drugs, as ordered by President Rodrigo R. Duterte.

“Our police force was able to bring down crime index in Palawan by 20 percent in 2017, and that is due to increased police visibility in distant areas, as well as our operations against the use of drugs,” he said.

Non-index crimes refer to cases of violation of special laws such as Republic Act (RA) No. 7610 (Child Abuse), RA 9165 (Illegal Drugs), RA 10591 (Illegal Firearms), Presidential Decree 705 (Illegal Logging), RA 4135 (Traffic Code), and others.
The Palawan Police, which celebrated its 27th anniversary, was established in 1991 immediately after the enactment of RA 7160, or the Local Government Code of 1991. (PNA)