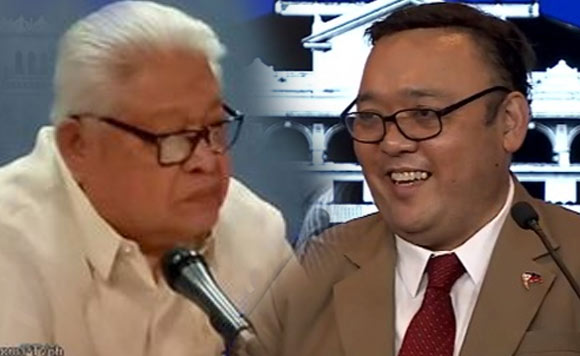 0 609
Share
Want more POLITIKO News? Get the latest newsfeed here. We publish dozens and dozens of politics-only news stories every hour. Click here to get to know more about your politiko - from trivial to crucial. it's our commitment to tell their stories. We follow your favorite POLITIKO like they are rockstars. If you are the politiko, always remember, your side is always our story. Read more. Find out more. Get the latest news here before it spreads on social media. Follow and bookmark this link. https://goo.gl/SvY8Kr

“Some individuals easily crumble under the weight of official title and jettison without qualms their principles for partisan subservience and convenience,” the Magnificent 7 lawmaker said, referring to the former Kabayan partylist congressman.

“Before his anointment as the leading apologist of President Rodrigo Duterte as presidential spokesman, then Rep. Harry Roque was critical of Duterte’s deadly war on drugs,” Lagman recalled.

“Roque even warned the President that the International Criminal Court (ICC) may enforce its jurisdiction over him for alleged crimes against humanity.   Roque was among those who campaigned for the ratification by the Philippines of the Rome Statute which created the ICC,” he added.

The Rome Statute was signed on February 28, 2011 by President Benigno Aquino III and the Senate gave its concurrence on August 23, 2011.

Lagman quoted a privilege speech delivered by Roque on August 11, 2016,m: “It is clear that the civilian population is being attacked—news reports all around us overwhelmingly establish that hundreds of Filipinos have been killed either directly by governmental forces or with their support or tolerance.”

Roque, according to Lagman,added that it “is also clear that the President is aware that these acts are ongoing. Even without proof of a directive on his part, he has, in many instances, spoken about the use of violence against drug syndicates.”

Roque likewise stated that “[w]hile it would be imprudent for me to say with certainty that President Duterte has already committed a crime against humanity, it would be a disservice to this entire nation if I did not warn him to be careful.”  Roque concluded that “[n]either the Rome Statute nor general international law prescribes a minimum number of victims for an indictment. So long as the [International Criminal Court] believes that the war on drugs is ‘widespread’ and ‘systematic,’ [it is] likely to investigate.”