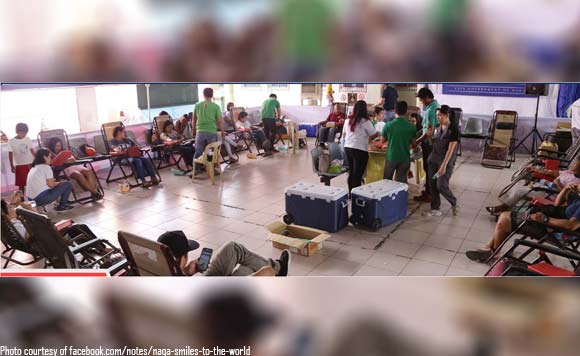 The Bicol Medical Center (BMC), together with the Naga City Scholars Guild and the City Government of Naga, conducted a blood donation drive activity to help boost the blood reserves in Albay province.

The event was dubbed as the “Dugong Nagueño, Alay sa mga Albayano”. It was held on February 6 at the Naga City People’s Hall.

“The recent volcanic activities of Mt. Mayon has resulted to the hampering of blood donation operations supposedly scheduled in the affected areas of Albay— concerning the BMC (the largest supplier of blood units in the Bicol Region) with regards to the negative effect of the non- implementation of the drives to the blood bank in the province— a lesser blood supply for the Albayanos who might be needing so,” the city added.

Dr. Diane Donacao of the BMC Blood Bank said that other municipalities near Legazpi City have been inquiring of their blood supplies, which indicates that the blood stock in the blood center in Legazpi is decreasing.

“In order to avoid further problems that may arise due to the perceived lack of supplies in the coming months, the BMC, together with the City Government of Naga launched the campaign, “Dugong Nagueño, Alay sa mga Albayano” to encourage Nagueños to donate blood and help the Albayanos affected by the recent volcanic activity,” the city said.

The blood donation drive will be held until June this year in different parts if Camarines Sur. The activity argets at least 400 blood units for the blood center in Legazpi City.