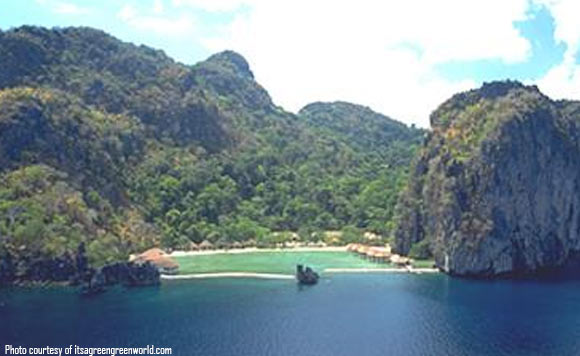 0 749
Share
Want more POLITIKO News? Get the latest newsfeed here. We publish dozens and dozens of politics-only news stories every hour. Click here to get to know more about your politiko - from trivial to crucial. it's our commitment to tell their stories. We follow your favorite POLITIKO like they are rockstars. If you are the politiko, always remember, your side is always our story. Read more. Find out more. Get the latest news here before it spreads on social media. Follow and bookmark this link. https://goo.gl/SvY8Kr

The Coast Guard in Palawan assured Thursday that the barge that ran aground in El Nido is not going to leak or spill oil in Bacuit Bay, allaying fears it would ruin the town’s marine environment.

Coast Guard Substation (CGSS) El Nido Deputy Commander Ensign Harvey Marmol said the part of the barge that hit the sands was not its rear end where fuel was stored.

Preliminary evaluation conducted by the Coast Guard on Wednesday around the craft tanker OMS 6 showed no oil spill in the surrounding
area of Sitio Cabigsing, Barangay Buena Suerte, Marmol added.

He maintained that no coral in the area had been destroyed, contrary to reports reaching the Palawan media.

The CGSS deputy commander in El Nido said Wednesday the barge had been wedged in the shallow waters off Buena Suerte since it arrived on
February 4.

It was the same day a gale warning was issued, he said, due to burly winds and waves caused by the northeast monsoon (amihan).

“The captain said they tried to wait for the highest tide starting that day for them to be able to dock at the port, but they failed to do so,” he said.

Apparently, the highest tide occurred at midnight and sea condition was not favorable enough to steer the barge near the port of El Nido.

The incident was only reported to the CGSS El Nido on Wednesday when the steering wheel of the barge suffered complete malfunction and floated it in the sandy part of the water.

Marmol said the vessel would be sent to El Nido by the company that operated the barge in five days to unload the aggregates being
carried.

“After the unloading of aggregates, then that’s the time we would see if it can move on its own. If not, then we will advise them to get a tugboat that will pull them to the port for inspection,” he said.

The operator will also be ordered to secure a seaworthiness certificate before it is allowed to leave the port of El Nido.(PNA)