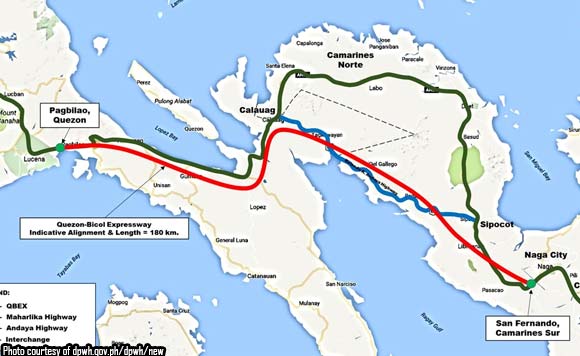 0 1,015
Share
Want more POLITIKO News? Get the latest newsfeed here. We publish dozens and dozens of politics-only news stories every hour. Click here to get to know more about your politiko - from trivial to crucial. it's our commitment to tell their stories. We follow your favorite POLITIKO like they are rockstars. If you are the politiko, always remember, your side is always our story. Read more. Find out more. Get the latest news here before it spreads on social media. Follow and bookmark this link. https://goo.gl/SvY8Kr

The Department of Public Works and Highways (DPWH) will undertake this year feasibility study of an expressway that will reduce the travel time between Manila and Bicol Region.

The department’s Planning Service – Project Preparation Division will conduct the feasibility study of the Quezon-Bicol Expressway (QBEx) and aims to finish it by the third quarter of the year.

DPWH Public-Private Partnership (PPP) Director Alex G. Bote reported to DPWH Secretary Mark A. Villar that the timeline of the feasibility study is on track for the timely implementation of the project that is aimed for construction from 2022 to 2026.

The QBEx Project will be rolled out under the PPP program. It has an estimated length of about 180 kilometers from Pagbilao, Quezon to the existing Maharlika Highway in San Fernando, Camarines Sur.

“The indicative project cost will be determined upon completion of the FS,” the department said.

The department said that the QBEx will be a “faster alternative option” of travellers from Quezon and Bicol Provinces to the congested Maharlika Highway.

“For the longest time, Daang Maharlika Highway also known as Pan-Philippine Highway is the only route of motorists heading and coming from Bicol Region to Manila. With QBEx, traveling will not only be faster but also safer since motorists can avoid traversing through mountainside and other fragmentary roads of Maharlika Highway,” Director Bote said