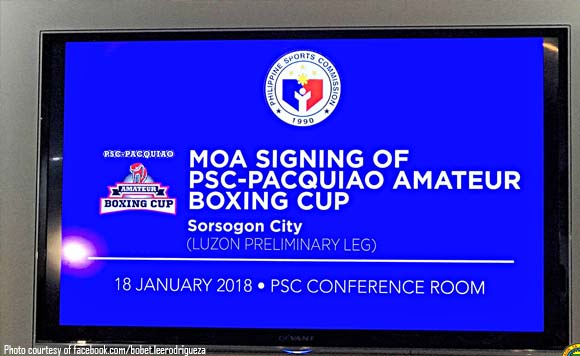 The rags to riches story of boxing superstar Manny Pacquiao has captivated many and made the sport very popular among Filipinos.

Even local governments have gotten in on the act and are developing their local pugilists in hopes of producing the next legend.

Sorsogon is one of them. Governor Robert “Bobet” Lee Rodrgiueza has inked a memorandum of agreement with the Philippine Sports Commission to hold the PSC-Pacquiao amateur boxing cup in the province.

On Facebook, the politiko said he hopes to spur sports development in Sorsogon. He also paid tribute to local boxing legend Michael Farenas.

But it’s time to shine the light on a new boxing champion. Will he be a Bicolano from Sorsogon?

“MOA-SIGNING with the PHILIPPINE SPORTS COMMISSION:

“We will continue to help the sports development in Sorsogon and I would like to thank the Philippine Sports Commission for choosing us to be the host city in this grassroots sports program. We are proud to have a world champion in Michael Farenas. But, it’s time na may kasunod na, dahil napakalaki ng potential ng ating mga atleta at kabataan sa Sorsogon.” (Around 200 boxers from the Luzon Region are expected to compete in the preliminaries that will take place inside Sorsogon National High School Gymnasium on January 27-28, 2018.)