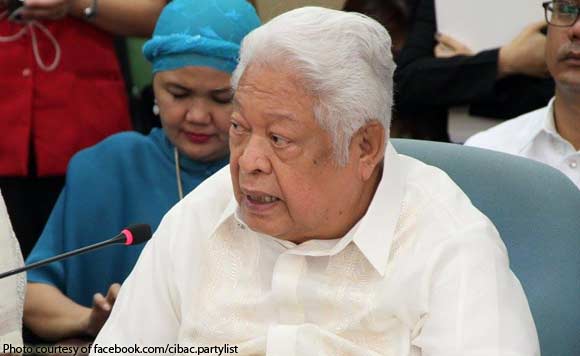 0 413
Share
Want more POLITIKO News? Get the latest newsfeed here. We publish dozens and dozens of politics-only news stories every hour. Click here to get to know more about your politiko - from trivial to crucial. it's our commitment to tell their stories. We follow your favorite POLITIKO like they are rockstars. If you are the politiko, always remember, your side is always our story. Read more. Find out more. Get the latest news here before it spreads on social media. Follow and bookmark this link. https://goo.gl/SvY8Kr

The House of Representatives nor the Senate can constitute themselves as a constituent assembly on their own as this violates the Constitution, 1st District Rep. Edcel Lagman said.

Lagman said the Constitution is clear that the constituent assembly should be composed of both houses of Congress.

“The constituent assembly, composed of the Congress, meaning the House of Representatives and the Senate would have to meet together. There can be no separate shadow boxing with the House and another by the Senate,” Lagman said Tuesday (January 23) in a press briefing at the Batasang Pambansa.

House Speaker Pantaleon Alvarez said Monday (January 22) the lower house can convene as a constituent assembly as the Constitution only requires a vote of three-fourths of all members, and does not specify for a joint session, unlike in approving declarations of martial law.

But Lagman said this is “against both the letter and spirit of the Constitution.”

The solon also scored the Senate resolution filed by Senator Ping Lacson calling for the upper house to convene as a constituent assembly separate from the House.

“The resolution by the Senate that they are going to meet separately to constitute a constituent assembly is also flawed,” Lagman said.

Several senators, who are wary of a possible abolition of the 101-year-old Senate to give way to a proposed unicameral legislature, have come forward in support of the resolution.

The issue of how to convene Congress into a constituent assembly would ultimately have to be settled by the Supreme Court, Lagman said.