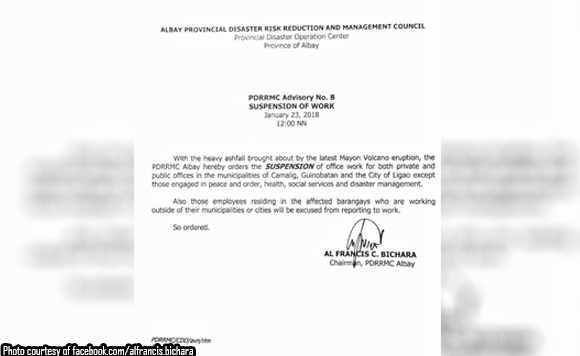 “With the heavy ashfall brought about by the latest Mayon Volcano eruption, the PDRRMC Albay hereby orders the SUSPENSION of office work for both private and public offices in the municipalities of Camalig, Guinobatan and the City of Ligao except those engaged in peace and order, health, social services and disaster management,” the governor’s order read.

Governor Bichara is the chairman of the Provincial Disaster Risk Reduction Management Council.

Meanwhile, those employees residing in the affected barangays who are working outside of their municipalities or cities will be excused from reporting to work, according to the order.

More than 35,000 individuals have fled their homes following the eruption of Mayon Volcano yesterday, according to the partial evacuation report of the Albay province.

Meanwhile, in a separate but related developments, the province of Albay said that it has already received a total of P6 million worth of relief goods from various Government and Non-Government Organizations nationwide.

“With Mayon raised to alert level 4 after spewing a 10km ash column, more people are expected to be evacuated from the 8km danger zone,” it added.