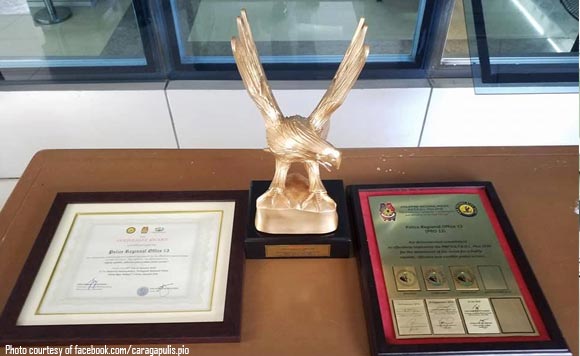 0 587
Share
Want more POLITIKO News? Get the latest newsfeed here. We publish dozens and dozens of politics-only news stories every hour. Click here to get to know more about your politiko - from trivial to crucial. it's our commitment to tell their stories. We follow your favorite POLITIKO like they are rockstars. If you are the politiko, always remember, your side is always our story. Read more. Find out more. Get the latest news here before it spreads on social media. Follow and bookmark this link. https://goo.gl/SvY8Kr

Philippine National Police-Caraga has received the “Gold Eagle Award” for its stellar achievements in Performance Governance System during a ceremony at Camp Crame, Quezon City, Monday.

PNP-Caraga garnered a rating of 96.67 percent for satisfactorily completing the mandatory requirement for the third stage of the PGS, which evaluates the performance of police units in the entire country.

“We thank the members of the Regional Advisory Council, the Technical Working Group, and the Regional Police Strategy Management Unit-13 for their unwavering support and commitment in the implementation of the PNP Peace and Order Agenda for Transformation and Upholding of the Rule of Law, or PNP PATROL Plan 2030, in Caraga Region,” said Chief Supt. Noli Romana, Caraga-PNP chief.

He also credited his predecessor, Chief Supt. Rolando Felix, for the award, commending the latter “for leaving such legacy of operational, technical, tactical, administrative and other notable aspects to make 2017 a “Banner Year” for the regional police office.”

The four key indicators of PGS are initiation, compliance, proficiency and institutionalization, with the end view of transforming the PNP into a highly capable, effective and credible police service.

A “Gold Eagle Award” is conferred to a PNP unit with an overall rating of 95 to 100 percent in certain stage of the PGS. (Noel B. Najarro/PNA)