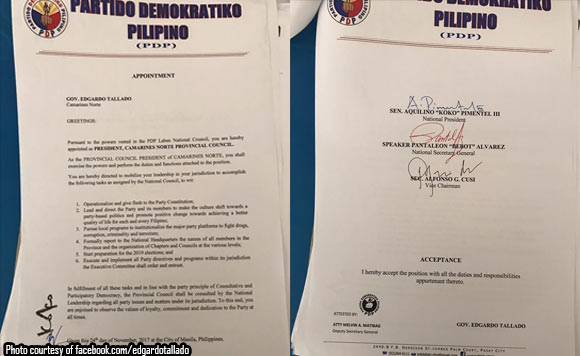 0 934
Share
Want more POLITIKO News? Get the latest newsfeed here. We publish dozens and dozens of politics-only news stories every hour. Click here to get to know more about your politiko - from trivial to crucial. it's our commitment to tell their stories. We follow your favorite POLITIKO like they are rockstars. If you are the politiko, always remember, your side is always our story. Read more. Find out more. Get the latest news here before it spreads on social media. Follow and bookmark this link. https://goo.gl/SvY8Kr

Camarines Norte Gov. Edgardo Tallado is cementing his position as a stalwart of the PDP-Laban, President Duterte’s political party, after he was named its President in his province.

Tallado, who was ousted from the then ruling Liberal Party in 2015 over an extra-marital affair, joined the PDP-Laban in October last year.

On Facebook, he shared a copy of the letter he received from PDP Laban officials informing him of his new position as President of the Camarines Norte Provincial Council.