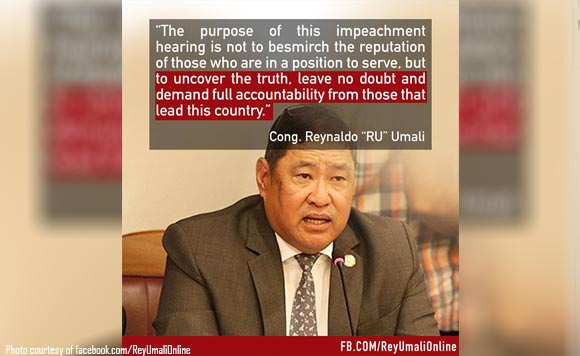 As the House of Representatives prepares to resume hearings on the impeachment complaint against Chief Justice Maria Lourdes Sereno, Justice Committee chair Reynaldo Umali would like everyone to know that he’s not taking sides.

We don’t know what prompted Umali to issue this reminder on his Facebook page, but the forthcoming hearing is expected to be controversial even after one Sereno’s colleagues, Justice Antonio Carpio, backed out of testifying at the committee hearing.

According to Umali, as a veteran lawyer, he values impartiality, respect, and adherence to the rule of law when he handles cases assigned to the justice panel.

He’s no stranger to impeachment cases, after all, having played a central role in the impeachment trial of former Chief Justice Renato Corona.

We guess his record should speak for itself.

“As the esteemed chairman of the House Committee on Justice hearing the impeachment complaint filed against Chief Justice Maria Lourdes Sereno, Rep. Reynaldo Umali, a veteran lawyer, values impartiality, respect, and adherence to the rule of law in handling cases assigned to his panel,” he posted on Facebook.