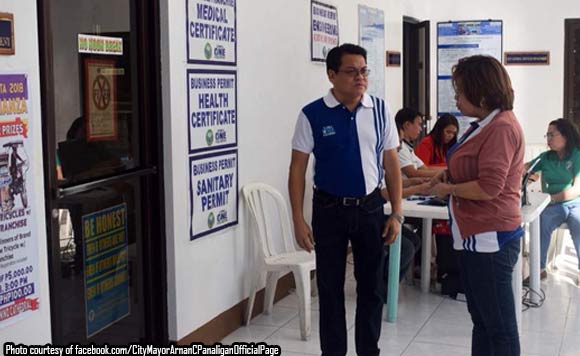 0 835
Share
Want more POLITIKO News? Get the latest newsfeed here. We publish dozens and dozens of politics-only news stories every hour. Click here to get to know more about your politiko - from trivial to crucial. it's our commitment to tell their stories. We follow your favorite POLITIKO like they are rockstars. If you are the politiko, always remember, your side is always our story. Read more. Find out more. Get the latest news here before it spreads on social media. Follow and bookmark this link. https://goo.gl/SvY8Kr

Calapan City Mayor Arnan C. Panaligan made sure that the process of securing of business permits at the City Hall is smooth and orderly.

Mayor Panaligan roamed around the premises of the City Hall and visited different offices to inspect the ongoing registration and renewal of business license earlier today.

One of the offices he visited was the City Health and Sanitation Department and conferred with Dr. Lisa Llanto.

The City Health and Sanitation Department is the office that issues sanitation and health certificates to business establishments.

“Making the rounds and inspecting the ongoing registration and renewal of business permits and licenses at City Hall – City Mayor Arnan C. Panaligan confers with Dr. Lisa Llanto of the City Health and Sanitation Department, the office involved in the issuance of sanitation and health certificates to business establishments,” the city said.

According to the city, it is using an simplified system for a faster and easier process of securing business permits.

“The City Government has been implementing an automated one stop, simplified and faster system of business registration and renewal,” the city said.

Meanwhile, the city reminds business owners to secure business permits while it is still on going at the City Hall to avoid penalties. It also told tricycle operators to renew their franchise.