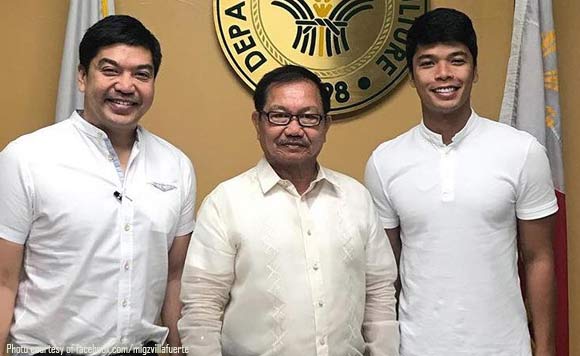 Camarines Sur Rep. Luis Raymund “LRay” Villafuerte and Governor Miguel Villafuerte have recently met with Department of Agriculture Secretary Emmanuel Piñol to discuss the projects of the department in the province.

Governor Migz said with the partnership of the province with the Agriculture department made Camarines Sur one of the top rice producer in the country.

The younger Villafuerte shared that during the term of his father as Camarines Sur governor, the province became the 6th rice producer in the country from being just 12th.

LRay served as Camarines Sur governor from 2004 to 2013. He is now serving his second term as congressman for the second district of the province.

“During my father’s three terms as governor, from being the 12th largest rice producer in the country, we became 6th,” Migz said.

The young governor also said that the continuing team-up of the province and Agriculture department made CamSur the 4th largest rice producer in the Philippines.

“Now, by continuing the programs and adding more projects, Camsur has become the 4th largest rice producer in the country!,” Migz Villafuerte.