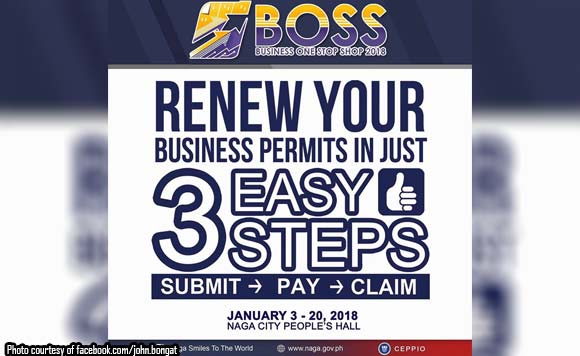 0 807
Share
Want more POLITIKO News? Get the latest newsfeed here. We publish dozens and dozens of politics-only news stories every hour. Click here to get to know more about your politiko - from trivial to crucial. it's our commitment to tell their stories. We follow your favorite POLITIKO like they are rockstars. If you are the politiko, always remember, your side is always our story. Read more. Find out more. Get the latest news here before it spreads on social media. Follow and bookmark this link. https://goo.gl/SvY8Kr

The City of Naga has hailed the first five taxpayers to renew their business permits yesterday under the Business-One-Stop-Shop (BOSS) program.

“FIRST FIVE TAXPAYERS. Just this morning, in an average of three (3) hours, these first five taxpayers completed renewing and securing their business permits!,” the city said.

Under the BOSS program, the city offers “three easy steps” to renew the required business permits. These steps are submitt, pay, and claim.

However, the city said that the renewal of business permits is only until January 20.

Those who will pay beyond January 20 will be imposed with penalties.

Naga City Mayor John Bongat touted the BOSS program as his the “most innovative” way in renewing their mayor’s permit in a hassle-free steps.

“RENEW YOUR BUSINESS PERMIT in less than a day, or even in a few hours thru 3 simple steps – the most innovative and shortest way to getting your Mayor’s Permit, hassle-free!,” Mayor Bongat said earlier.