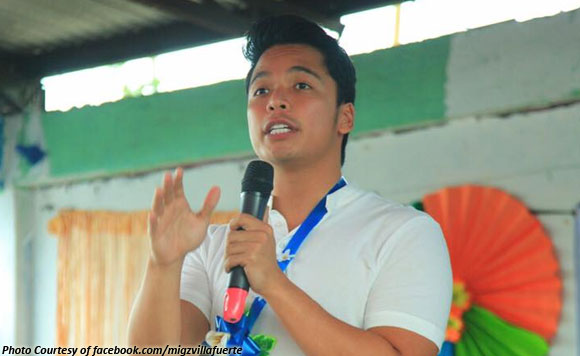 0 732
Share
Want more POLITIKO News? Get the latest newsfeed here. We publish dozens and dozens of politics-only news stories every hour. Click here to get to know more about your politiko - from trivial to crucial. it's our commitment to tell their stories. We follow your favorite POLITIKO like they are rockstars. If you are the politiko, always remember, your side is always our story. Read more. Find out more. Get the latest news here before it spreads on social media. Follow and bookmark this link. https://goo.gl/SvY8Kr

Camarines Sur Governor Miguel Villafuerte told his constituents not to believe a “fake memorandum” for the supposed cancellation of classes tomorrow, January 4.

The governor said that no memorandum has been issued yet as the risk assessment is still on going.

“It has come to our attention that there has been a FAKE memorandum/announcement in regard to the suspension of classes tomorrow circulating online,” Villafuerte said.

Villafuerte, who chairs the Provincial Disaster Risk Reduction and Management Council (PDRRMC), said that they have not released any memorandum yet on class suspension tomorrow.

“The Provincial Government and the PDRRMC HAVE NOT RELEASED ANY SUSPENSION ANNOUNCEMENT FOR TOMORROW, JANUARY 4, 2018, as risk assessment is still on-going,” the governor said.

“All official announcements regarding TD Agaton or any weather disturbance/emergencies shall ONLY BE POSTED HERE on my official facebook account and/or The PDRRMC’s official account, Edmero Camarines Sur. Please be wary of false information,” Villafuerte added.

Villafuerte cancelled the classes today, January 3 to ensure the safety of his constituents, particularly the students.

The young governor said that with the continuous rains experienced by the province for the past few weeks coupled by the threat of Tropical Depression Agaton, more areas are becoming vulnerable to flooding and landslide.

“Due to incessant rains being experienced in the province these past few weeks flooding, flash floods and landslides have been reported by various municipalities of Camarines Sur,” Villafuerte’s Memorandum No. 4 read.