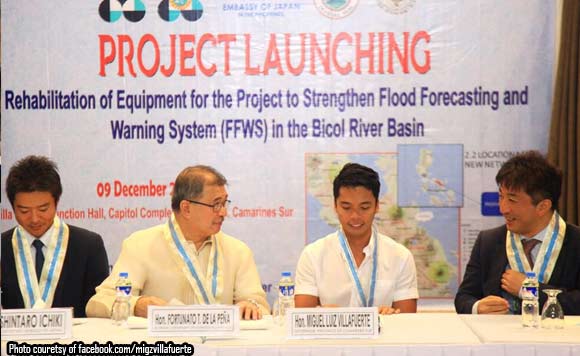 0 614
Share
Want more POLITIKO News? Get the latest newsfeed here. We publish dozens and dozens of politics-only news stories every hour. Click here to get to know more about your politiko - from trivial to crucial. it's our commitment to tell their stories. We follow your favorite POLITIKO like they are rockstars. If you are the politiko, always remember, your side is always our story. Read more. Find out more. Get the latest news here before it spreads on social media. Follow and bookmark this link. https://goo.gl/SvY8Kr

The Camarines Sur province has launched last month a rehabilitation project to modernize the Flood Forecasting and Warning System with the aim of achieving zero casualty during disasters.

The said project as launched by the Camarines Sur provincial government, led by Governor Miguel Villafuerte, Department of Science and Technology-Philippine Atmospheric, Geophysical and Astronomical Services Administration, and the Embassy of Japan.

“DOST, PAGASA, the Provincial Government of Camarines Sur, and the Embassy of Japan launched the project that will rehabilitate and modernize the equipment for Flood Forecasting and Warning Sytem (FFWS) in the Bicol River Basin,” Governor Villafuerte said.

The governor said that the project will not just benefit the Camarines Sur province but also the entire Bicolandia Region.

He added that Bicol Region needs this projects since the latter houses one of the biggest river in the country – the Bicol River – and it usually being battered by storms.

Camarines Sur was recently affected by the wrath of tropical storm Urduja. During the onslaught of the strom, the provincial government has been active in reminding its residents and bus companies to cancel their trips to avoid accidents.

The preparation of the province has yielded positive results as it recorded zero casualty during the storm.