Lagman: Martial law in Mindanao would run for 526 days unless SC stops extension 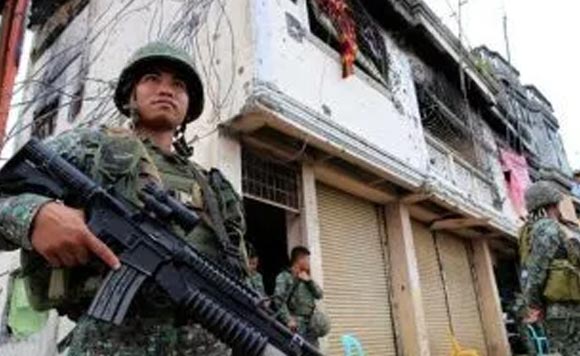 0 591
Share
Want more POLITIKO News? Get the latest newsfeed here. We publish dozens and dozens of politics-only news stories every hour. Click here to get to know more about your politiko - from trivial to crucial. it's our commitment to tell their stories. We follow your favorite POLITIKO like they are rockstars. If you are the politiko, always remember, your side is always our story. Read more. Find out more. Get the latest news here before it spreads on social media. Follow and bookmark this link. https://goo.gl/SvY8Kr

Albay first-district Rep. Edcel Lagman said two extensions of martial law in Mindanao up to December 31, 2018 would last for 526 days or “876.67 percent more” than the initial 60-day period under President Rodrigo Duterte’s Proclamation No. 216.

“Five hundred twenty-six (526) days total extension is an enormous increase of 876.67 percent over the original period of 60 days. This is inordinately long. It is a deplorable defiance of the constitutional limitation of the duration of martial law and its extension,” Lagman said.

Lagman, along with other members of the Magnificent 7 group, has filed a petition asking the Supreme Court to issue a temporary restraining order and preliminary injunction against the extension of martial law in Mindanao.

Last Friday, the Supreme Court said the petition “appears to be sufficient in form and substance” and ordered the respondents to respond.

“One of the stringent safeguards in the 1987 Constitution to deter and foreclose abuses as a result of a martial law imposition is the manifest limitation of the period of martial law and the suspension of the writ of habeas corpus and the extension thereof,” he said in a statement.

“The Constitution provides that the declaration of martial law and the suspension of the writ of habeas corpus shall be ‘for a period not exceeding sixty days’, and any extension thereof may be granted by the Congress upon initiative of the President, in the ‘same manner’ as the original proclamation sought to be extended,” Lagman said.

“This means that a valid extension must comply with the following requisites: (a) a joint session of the Congress must act on the extension; (b) it must be based on the limited grounds of actual rebellion or invasion when public safety requires it; and (c) it must be only for a reasonably short duration,” he said.

“A full year re-extension, aside from being factually unwarranted, is oppressively long and patently unconstitutional,” Lagman said.