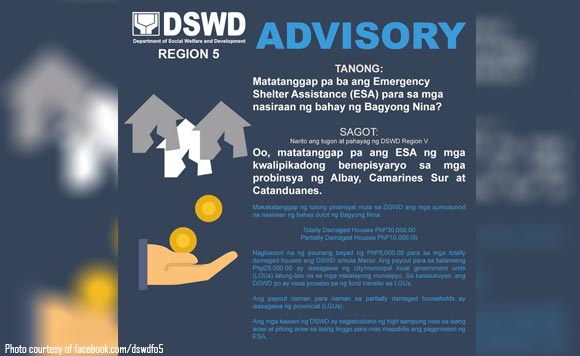 0 946
Share
Want more POLITIKO News? Get the latest newsfeed here. We publish dozens and dozens of politics-only news stories every hour. Click here to get to know more about your politiko - from trivial to crucial. it's our commitment to tell their stories. We follow your favorite POLITIKO like they are rockstars. If you are the politiko, always remember, your side is always our story. Read more. Find out more. Get the latest news here before it spreads on social media. Follow and bookmark this link. https://goo.gl/SvY8Kr

The Department of Social Welfare and Development Regional Office V has assured that victims of Typhoon Nina last year in Bicol Region will get their Emergency Shelter Assistance (ESA).

The City said that those whose houses were damaged by Typhoon Nina will receive the following financial assistance from the DSWD:

The Naga City government also said that employees of the DSWD are working overtime for seven days a week just to process all ESA application.

Typhoon Nina was considered as one of the strongest typhoon to batter Bicol Region in December 25 last year.