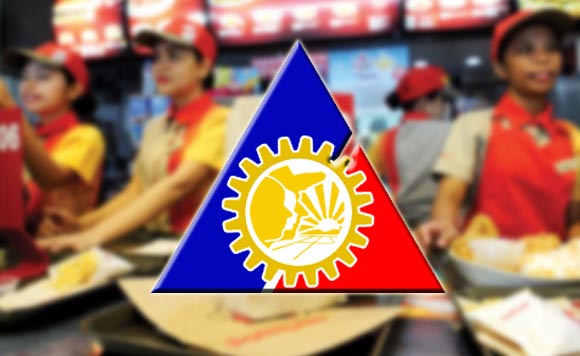 At least 500 workers at nine branches of fastfood giant Jollibee are getting a happy Christmas, after the Department of Labor and Employment ordered their regularization.

The DOLE said it issued the order after it found the nine branches in the region to be engaged in labor-only contracting activities.

It likewise ordered them to provide proof of remittances with the Social Security System, PhilHealth, and Pag-Ibig to secure workers’ social welfare benefits.

Covered by a compliance order issued by DOLE Regional Office 4B Director Alvin Villamor were (https://www.dole.gov.ph/ro_polo_updates/view/1465):

JFC, one of the largest fast food chains in the country, has more than 750 stores in the Philippines, DOLE noted.

In its order, the DOLE pointed out Jollibee Foods Corp. and its three contractors should regularize 468 employees who it said were found to be performing activities “which are directly related to the main business operation of the food chain.”

Also, it said JFC exercises “full authority” in the work of the outsourced employees.

Meanwhile, the DOLE’s regional labor inspectors saw violations including the lack of substantial capital of the contractors.

They noted the deployed employees use the principal’s equipment and tools in performing the outsourced services.

Worse, the DOLE said it found non-compliance by the contractors with Occupational Safety and Health (OSH) standards, due to the lack of trained safety officers and failing to submit OSH reports.

The DOLE ordered JFC and its contractors to immediately issue appointment letters and payroll reflecting the entitlements of the affected workers as regular employees.