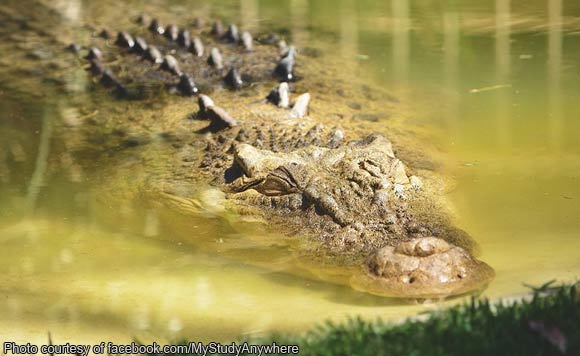 0 534
Share
Want more POLITIKO News? Get the latest newsfeed here. We publish dozens and dozens of politics-only news stories every hour. Click here to get to know more about your politiko - from trivial to crucial. it's our commitment to tell their stories. We follow your favorite POLITIKO like they are rockstars. If you are the politiko, always remember, your side is always our story. Read more. Find out more. Get the latest news here before it spreads on social media. Follow and bookmark this link. https://goo.gl/SvY8Kr

A crocodile killed a Philippine man who was securing his boat as a tropical storm bore down on the western island of Palawan, police said Saturday.

Abdulsalam Binang Amerhasan, 53, went to the river in driving rain on Thursday to tie up his boat, with waters rising as Tropical Storm Tembin closed in, a police report said.

When Amerhasan failed to return home after an hour, his worried wife sought help from neighbours who launched an overnight search, believing he had had an accident, it added.

“The community responded and conduct(ed a) search along the river until they found out that the lifeless body of the victim was still (being) tumultuously bitten by a crocodile,” it added.

Police did not say what happened to the crocodile.

The attack in the fishing town of Bataraza was the third reported since October in Palawan, often called the Philippines’ “last frontier”, and one of the few areas in the country where crocodiles are still common.

Hunting and habitat loss have seen crocodile numbers plummet in other parts of the archipelago.

Last month a 12-year-old girl was fetching water in a forested area elsewhere on the island when she was dragged away by a crocodile in front of her horrified siblings. Police said the girl has not been found.

In October a Palawan woman also fetching water was bitten by a crocodile but survived when her niece threw rocks at the huge reptile, successfully driving it away, police said.

The state weather service said Tembin was expected to hit Balabac and Bataraza late Saturday after killing more than 100 people on the main southern island of Mindanao.