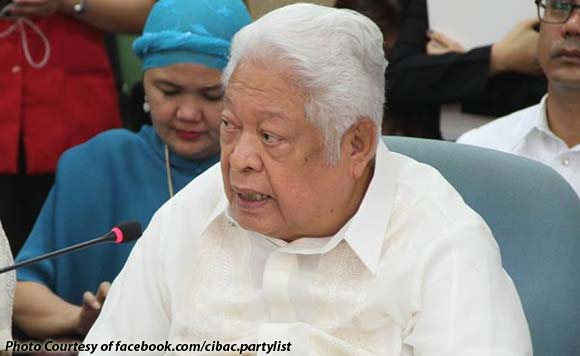 0 625
Share
Want more POLITIKO News? Get the latest newsfeed here. We publish dozens and dozens of politics-only news stories every hour. Click here to get to know more about your politiko - from trivial to crucial. it's our commitment to tell their stories. We follow your favorite POLITIKO like they are rockstars. If you are the politiko, always remember, your side is always our story. Read more. Find out more. Get the latest news here before it spreads on social media. Follow and bookmark this link. https://goo.gl/SvY8Kr

Albay first-district Rep. Edcel Lagman took to the Bible to underscore his objections to the House leadership’s move to slash infrastructure funds from 24 mostly opposition lawmakers.

“The enduring verity that man shall not live by bread alone is a truism only a few appreciate.

This adage was the admonition of Jesus Christ to Satan when the latter challenged the Son of God who was fasting in the wilderness to transform stone into bread,” the Magnificent 7 lawmaker said.

“Among those who do not comprehend this tenet is the House leadership, which penalizes dissenting solons by scrapping the infrastructure projects in their respective districts and constituencies,” Lagman said in a statement.

He was reacting to the last-minute deletion of infrastructure items in the 2018 budget for the districts or constituencies of opposition members or political adversaries of the House leadership.

“It is not the amount of projects discarded but the temerity of castigating independent-minded legislators for their critical stance against the Duterte administration,” Lagman said.

“While infrastructure projects are needed, their absence cannot be used to subjugate crusading Representatives or obliterate their sacrosanct principles,” he said.

“Steadfast and militant opposition lawmakers will not be cowed and will survive the drought of projects for their constituents, even as they continue advocating differing views,” Lagman said.

“The blanket withdrawal of all infrastructure projects from a Representative’s district is a malevolent innovation of the current dispensation,” he added.

In past administrations, Lagman said only the releases of the erstwhile Priority Development Assistance Fund (PDAF) were withheld from the districts of a few “errant” legislators.

“Now, the totality of infrastructure projects under the nationwide infrastructure program of the Department of Public Works and Highways (DPWH) previously intended for the deprived congressional districts were deleted from the General Appropriations Act (GAA),” he said.

“These projects are not even initiated or submitted by the concerned Representatives since they are already integral to the Duterte administration’s “Build, Build, Build” policy being implemented by the DPWH,” Lagman said.