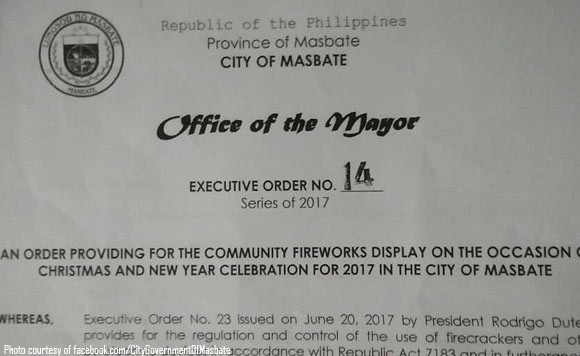 Masbate City Mayor Rowena Tuason has issued an order banning the use of firecrackers anywhere in the city these holidays, except in a community fireworks display.

The mayor signed the Executive Order 14 or nn order providing for the community fireworks display on the occasion of Christmas and New Year Celebration for 2017 in the City of Masbate on Nov. 6.

The EO 14 is pursuant to the Executive Order 23 of President Rodrigo Duterte which provides for the regulation and use of firecrackers and other pyrotechnic devises.

In her ordinance, Mayor Tuason said that local chief executives are authorize to promulgate the necessary rules and regulations on firecrackers and other pyrotechnic devises within their territorial jurisdiction in conformity with the national rules and regulation.

“By virtue of Executive Order No. 14 issued by Mayor Rowena Tuason on Nov. 6, lighting of firecrackers anywhere in Masbate City in celebrating Christmas and New Year is prohibited except in a community fireworks display,” the City said.

The City, meanwhile, has created a community fireworks display where the use of firecrackers these holidays will be confined.