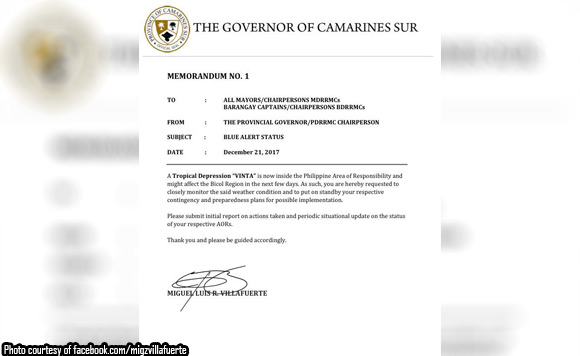 Camarines Sur. Governor Miguel Villafuerte has already alerted the local chief executives in the different cities and municipalities in the province in preparation of the Tropical Storm Vinta.

“Blue Alert Status is now raised in the entire province in preparation for TD Vinta. Keep posted for advisories and announcements,” the Governor said.

In his memorandum order, Villafuerte said that Vinta, now inside the Philippine Area of Responsibility, “might affect the Bicol Region in the next few days”

“As such, you are hereby requested to closely monitor the said weather condition and to put standby your respective contingency and preparedness plans for possible implementations,” the memorandum read.

Mayor of local government units were likewise told to submit initial report on actions taken and their situational report status.

The province of Camarines Sur has been also affected by the Tropical Storm Urduja recently.

The Camarines Sur provincial government has already provided relief good to more than 10,000 families affected by the Tropical Storm Urduja. The response team of the province has started distributing relief goods to affected residents as early as Sunday.

During the onslaught of the tropical storm Urduja, the provincial government has been active in reminding its residents and bus companies to cancel their trips to avoid accidents.