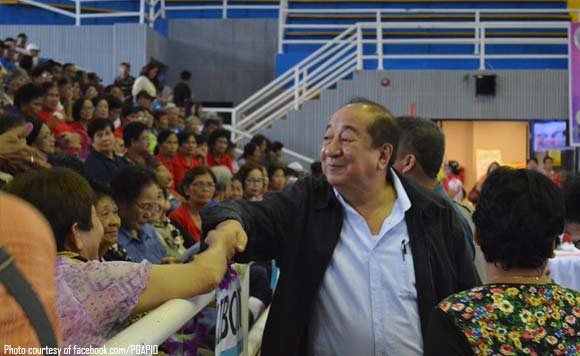 0 672
Share
Want more POLITIKO News? Get the latest newsfeed here. We publish dozens and dozens of politics-only news stories every hour. Click here to get to know more about your politiko - from trivial to crucial. it's our commitment to tell their stories. We follow your favorite POLITIKO like they are rockstars. If you are the politiko, always remember, your side is always our story. Read more. Find out more. Get the latest news here before it spreads on social media. Follow and bookmark this link. https://goo.gl/SvY8Kr

Albay Governor Al Francis Bichara played Santa Claus this Christmas for the province’s senior citizens as he gave them gifts today during the Year-End General Assembly of Senior Citizens held at the Albay Astrodome.

The event was spearheaded by the provincial government through the Provincial Social Welfare and Development Office.

During his speech, the generous Governor Bichara revealed that he would be giving each offices of senior citizens shall be given a flat TV Screen and a Desktop with Printers to be used for their Data Base at their offices in their respective Municipalities or Cities.

He also said that wheelchairs will also be given per office, including five Stick canes each for the use of the Senior Citizens of Albay.

Bichara said that he wants everyone to feel the spirit of Christmas through this kind of event, especially to the senior citizens who have contributed a lot to the development of the province.

“Everybody, especially the senior citizens contributed a lot to the development of our Province, on their respective Municipalities” Bichara was quoted as saying.

Bichara also said that the Provincial Government of Albay has a lot of services to offer for the senior citizens such as Medical, Dental, Optical, and Surgical Mission that will be visiting Municipalities for free check-ups and medical services that prioritizes the Senior Citizens,

“The Year-End Assembly for Senior Citizens is a whole day event which aims to give smiles to the Lolos and Lolas of Albay and showcase their skills and talents through intermission numbers they will be giving,” said the provincial government,