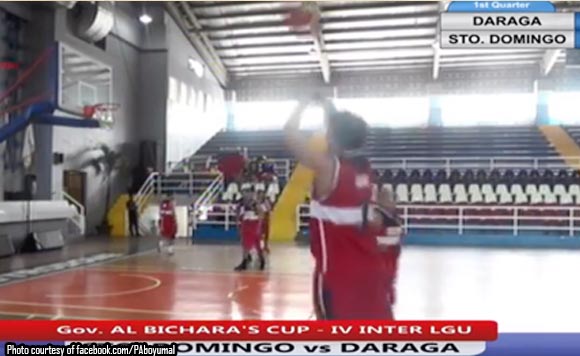 The first game commenced with the traditional ball toss led by Governor Bichara at the start of the game between Daraga and the Sto. Domingo teams.

“The Players showed that age never matters when it comes to their passion as they amazed the audience of their skills on the said sport. But the end, the Sto. Domingo won the Game with 2 points,” the province said.

Governor Bichara handed out Gift cheques, the financial assistance to the teams/officials/representatives of each municipality where the Inter-Clustered barangay will be held before the start of the game.

Other teams that played today were Pio Duran versus Manito, Malinao LGU versus Legazpi LGU, and finally, the Malilipot LGU versus Camalig LGU.

“The Gov. Al Francis Bichara’s Cup IV is a part of a series of sports tournament being played simultaneously, the 1 st edition is the long time Governors Cup, now on its 19th season, which features teams from schools all over the province, the Regional tournament which invites the best teams from the Bicol Region, and an inter barangay tournament,” the province said earlier.

Meanwhile, under the leadership of Bichara, a well known sports enthusiast, the province of Albay has agreed with the Philippine Sports Commission (PSC) to hold the first Sports Summit which aims to conduct a training for young athletes and their coaches.

“The Sports Summit aims to conduct a training for the Local Coaches by the National Coaches in order for Albay to be equipped and ready for the upcoming Regional, National or International competition or games,” the province said.

“We really should have more events and create more competitions, and the kids need continuous exposure for them to be equipped for bigger tournaments.” Bichara was quoted as saying earlier.

The planned Sports Summit is tentatively slated on April 2 to 6, 2018 right after the Holy Week.