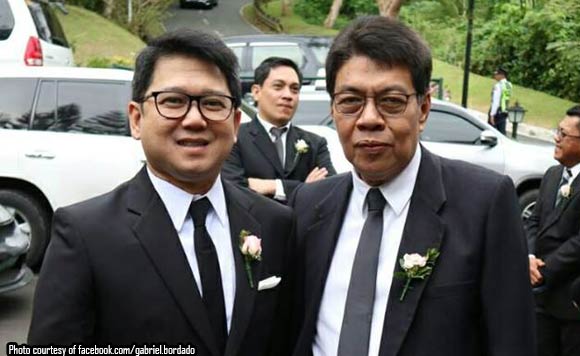 Camarines Sur Rep. Gabriel Bordado has expressed gratitude to Quezon City Mayor Herbert Bautista for the latter’s financial grant to Naga City for rehabilitation in the aftermath of Typhoon Nina.

Rep. Bordado and Mayor Bautista recently met during a wedding of their common friend where the former got a chance to personally thank the latter for the grant.

“I met MAYOR HERBERT “BISTEK” BAUTISTA at the sidelines of the wedding of ATTY. GIGI MARISTELA (the daughter of JUDGE FRONYING and ATTY. LUZ MARISTELA) and YVES OPSOMER, thanking him for the assistance extended by Quezon City to Naga in the aftermath of TYPHOON NINA,” Bordado said.

Rep. Bordado also recalled that he and Mayor Bautista were classmates before in a special course in National University of Singapore funded by World Bank in 2010.

“Actually, Mayor Bistek and I, along with then newly elected Mayor John Bongat, Wilfredo Briñas Prilles Jr., Frank Mendoza, and Chito Palmiano were classmates in a special course at the LEE KWAN YEW SCHOOL OF POLICY of the NATIONAL UNIVERSITY OF SINGAPORE in 2010. The course was funded by the SINGAPORE GOVERNMENT and the WORLD BANK,” Rep. Bordado recalled.

The City of Naga has received more than P20-million donation from Quezon City last month for the rehabilitation of areas hit by Super Typhoon Nina last year.

Naga City got P20.268 million from its “sister city” which was personally given by Mayor Herbert Bautista and Vice Mayor Joy Belmonte, together with the City Council to Naga City Mayor John Bongat in a simple ceremony in November.