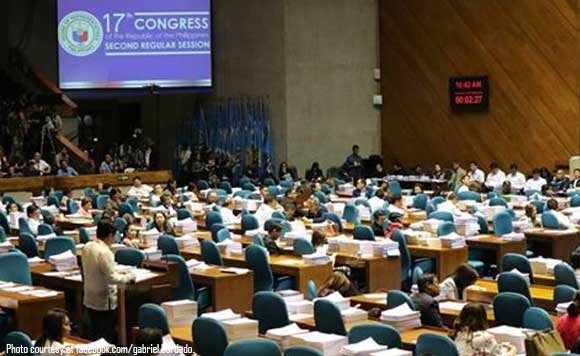 Even when he’s just one of a few dissenters, this did not stop Bordado taking a stand and casting his “no” vote and explaining why there is no need to extend the grant of this power to the President.

According to him, the President can already call out the police and the military to address security concerns with the powers available to him even without martial law.

It’s better for the country to focus its efforts on reconstructing Marawi and concentrating on the country’s socio-economic development, he said.

“WHY I VOTED AGAINST THE EXTENSION OF MARTIAL LAW FOR ONE YEAR IN MINDANAO: Interpellation/Manifestation (Time
Limit: 3 minutes)
On October 17, 2017, when PRESIDENT RODRIGO DUTERTE declared Marawi liberated from terrorist influence after five months of incessant fighting, I rejoiced along with our millions of countrymen. I thanked the President for his decisiveness and tenacity. I commended the ARMED FORCES OF THE PHILIPPINES and the PHILIPPINE NATIONAL POLICE for their bravery and great sacrifice. Subsequent events would further seal the victory in Marawi.

A few days ago, the international news agency REUTERS reported that “Iraqi Prime Minister HAIDER AL-ABADI declared the final victory over the Islamic State after Iraqi forces drove its last remnants from the country–three years after the militant group captured about a third of Iraq’s territory.”

Now, Mr. Speaker, let me propound some questions to the HONORABLE SECRETARY MEDIALDEA: Why is there a need to extend martial law in Mindanao for one year? Why one year? Will it not be in the best interest of the country TO DO AWAY WITH MARTIAL LAW ALTOGETHER and FOCUS OUR COLLECTIVE EFFORTS ON THE RECONSTRUCTION OF MARAWI AND THE SOCIO-ECONOMIC DEVELOPMENT OF THE COUNTRY? Anyway, given all the powers and resources at the disposal of the President plus his unprecedented popularity, he can easily call out the Armed Forces and the PNP to fully address security concerns.

Explanation of My Vote

(Time Limit: One Minute)
Mr. Speaker, as I stated in the interpellation period, the President has all the resources and powers at his disposal, including his unprecedented popularity among our people, to address security concerns.
Mr. Speaker, let us, therefore, REBUILD MARAWI IN THE FRAMEWORK OF OUR CONSTITITION AS ENUNCIATED IN THE LATTER PART OF THE PREAMBLE which seeks to establish a government that will “SECURE TO OURSELVES AND OUR POSTERITY THE BLESSINGS OF INDEPENDENCE AND DEMOCRACY UNDER THE RULE OF LAW AND A REGIME OF TRUTH, JUSTICE, FREEDOM, LOVE, EQUALITY, AND PEACE.”
If we do so, Mr Speaker, our victory in Marawi and Mindanao over these lawless elements will not only be decisive but UNQUALIFIED and COMPLETE.
I, therefore, vote NO to the proposed extension of martial law for one year in Mindanao,” he posted