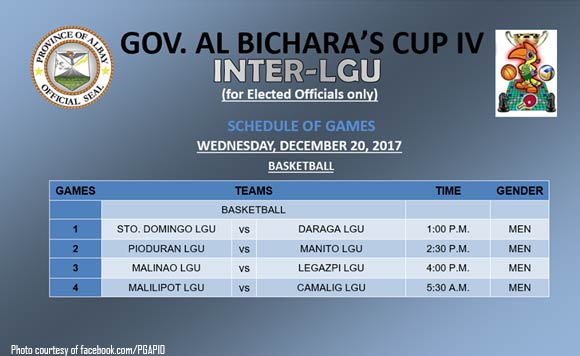 For the love of sports, Albay Gov. Al Francis Bichara is sponsoring a basketball tournament for elected officials from different local government units in the province.

The inter-LGU hoops tourney dubbed as the Gov. Al Francis Bichara’s Cup IV will kick off on December 20, 2017 at the Albay Astrodome.

“The Gov. Al Francis Bichara’s Cup IV is a part of a series of sports tournament being played simultaneously, the 1 st edition is the long time Governors Cup, now on its 19th season, which features teams from schools all over the province, the Regional tournament which invites the best teams from the Bicol Region, and an inter barangay tournament,” the province said.

On the first day of the tournament, four games will be played. Sto. Domingo LGU will get to play against Daraga LGU, followed by the game of Pio Duran versus Manito, and then Malinao LGU will face off the Legazpi LGU, and finally, the Malilipot LGU versus Camalig LGU.