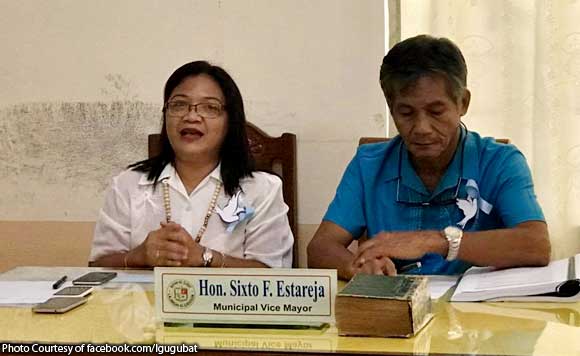 0 754
Share
Want more POLITIKO News? Get the latest newsfeed here. We publish dozens and dozens of politics-only news stories every hour. Click here to get to know more about your politiko - from trivial to crucial. it's our commitment to tell their stories. We follow your favorite POLITIKO like they are rockstars. If you are the politiko, always remember, your side is always our story. Read more. Find out more. Get the latest news here before it spreads on social media. Follow and bookmark this link. https://goo.gl/SvY8Kr

The local government of Gubat town in Sorsogon is pushing for localized peace talks with the National Democratic Front – but also wants the police combat camp to remain.

Mayor Sharon Escoto cited the high number of killing and shooting incidents from June to November 2017 in calling for the localized talks.

“We are calling for a localized peace talk and ceasefire to bring back the peace in our town, and to minimize the collateral damage brought about by these armed conflicts,” Escoto said.

For its part, the Gubat town council passed a resolution for the retention of the 3rd Maneuver Regional Public Safety Battalion camp in Barangay San Ignacio in Gubat.

“This effort is a support to the vision of Gubat to become a center of agro-ecotourism, trade and industry, and quality education, thus the LGU-Gubat is making a lot of effort to address the root cause of this conflict,” Vice Mayor Sixto said.