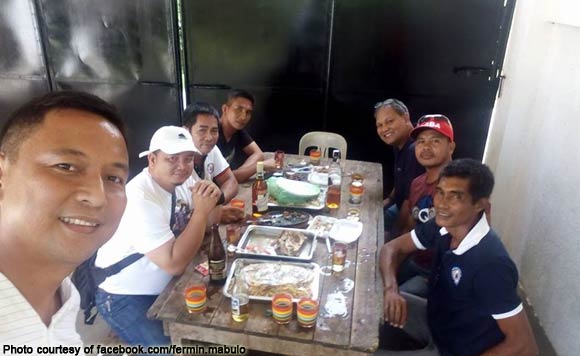 0 520
Share
Want more POLITIKO News? Get the latest newsfeed here. We publish dozens and dozens of politics-only news stories every hour. Click here to get to know more about your politiko - from trivial to crucial. it's our commitment to tell their stories. We follow your favorite POLITIKO like they are rockstars. If you are the politiko, always remember, your side is always our story. Read more. Find out more. Get the latest news here before it spreads on social media. Follow and bookmark this link. https://goo.gl/SvY8Kr

Aside from visiting ongoing projects such as the road construction in Brgy Alianza to Calascagas , Mabulo stayed at home, enjoyed family time, took selfies, entertained visitors and friends and spoiled his cow.

“Trained my bull to play dead. He is now sleeping soundly after a massage therapy,” he said on the video he posted on Facebook on Wednesday, while using the hashtag #mayorselfieonvacation

Mabulo and his ten staff members were recently suspended for three months and a day for simple misconduct charges. The order was issued by Interior and Local
Government-Camarines Sur’s Melody Relucio last Aug 31.

Quoting a report from the Bicol Standard, Mabulo said the suspension order was based on a complaint from one of the illegal loggers, miners or quarry operators the Sagip Kalikasan Task Force of Camsur had arrested in 2013.

Mabulo will be temporarily replaced by Vice Mayor Aris Ragay until Dec 2 this year.

With you this relaxed, that must be a blessing in disguise! Maximize your 3 months, mayor! It’s not that long.