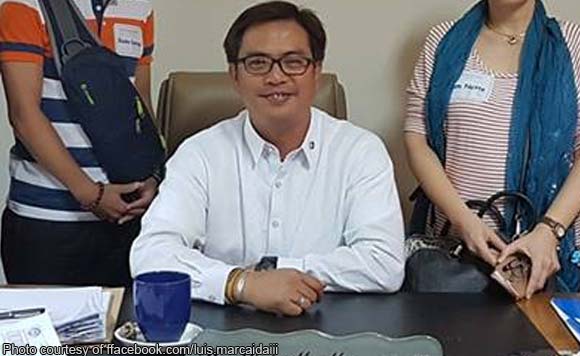 0 710
Share
Want more POLITIKO News? Get the latest newsfeed here. We publish dozens and dozens of politics-only news stories every hour. Click here to get to know more about your politiko - from trivial to crucial. it's our commitment to tell their stories. We follow your favorite POLITIKO like they are rockstars. If you are the politiko, always remember, your side is always our story. Read more. Find out more. Get the latest news here before it spreads on social media. Follow and bookmark this link. https://goo.gl/SvY8Kr

The wife and bodyguard is keeping close watch on Vice Mayor Luis Marcaida III as the City Prosecution Office (CPO) starts its probe on his alleged illegal possession of hard drugs, firearms, and incendiary devices.

Monette, the vice mayor’s wife, has stayed by his side since he was held under custody, and she was has maintained her husband’s innocence.

“We hope for justice regarding this because their accusations against my husband are not true,” she said.

Marcaida is under the custody of the CPO. He and Monette are staying inside a small room within the Investigation Branch Office.

Marcaida’s bodyguard, David Gales, who was charged with illegal possession of an alleged unlicensed .38 caliber pistol, was allowed to post P160,000 bail.

At the CPO Tuesday morning, Gales said he would rather stay with Marcaida, than return to his home since “it’s a safer place.”

The vice mayor showed no trace of hard drug use when he was placed under a mandatory drug test by the Palawan Police Provincial Office (PPO) Crime Laboratory.

“The drug test was done to check if he has traces of shabu, and he turned negative,” said PNP DEG Superintendent Enrico Rigor, who headed the team that raided Marcaida’s house in Jacana Road, Barangay Bancao-Bancao Monday morning.

Rigor added the result of the drug test will not, in any way, hinder the filing of the cases against the vice mayor.

Respect remains between him and political rival, says Naujan…