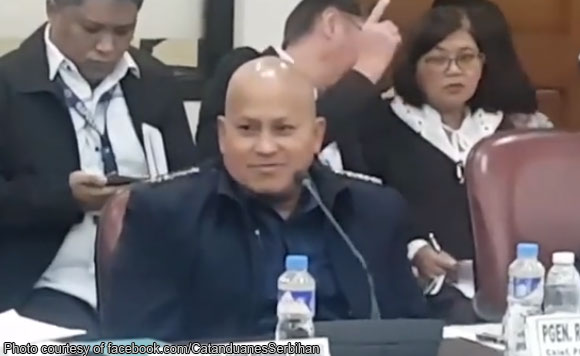 0 610
Share
Want more POLITIKO News? Get the latest newsfeed here. We publish dozens and dozens of politics-only news stories every hour. Click here to get to know more about your politiko - from trivial to crucial. it's our commitment to tell their stories. We follow your favorite POLITIKO like they are rockstars. If you are the politiko, always remember, your side is always our story. Read more. Find out more. Get the latest news here before it spreads on social media. Follow and bookmark this link. https://goo.gl/SvY8Kr

PNP Chief Ronald dela Rosa was meek as a lamb while receiving a lecture from Catanduanes Congressman Cesar Sarmiento.

“Eight months have passed and the case did not make any progress,” Sarmiento said.

In a video posted by Sarmiento on his Facebook, Sarmiento enumerated reasons why the current mega shabu lab case is bound for failure. He cited the poor and uncorroborated evidence, the questionable capacity of investigators and the credibility of witness Ernesto Tabor, Jr., whom he called a “recidivist” and “drug user.”

“I’m speaking in behalf of the people of Catanduanes. I’m sure, PNP Chief, many people have sought your help. I hope this problem on drugs will soon end as this has destroyed the image of Catanduanes. Our island-province is so beautiful but it has become popular because of the mega shabu lab. We all want the truth to come out. May we ask for the commitment of the PNP and the Department of Interior and Local Government in seeking the truth,” the firm lawmaker told dela Rosa.

The lawmaker, at that time, was surrounded by police officers and officials in their blue uniform.

Dela Rosa responded with a meek but reassuring “Yes. We will give our 101 percent, Your Honor.”

He also assured the solon that politics won’t get in the way of the investigation and prosecution.