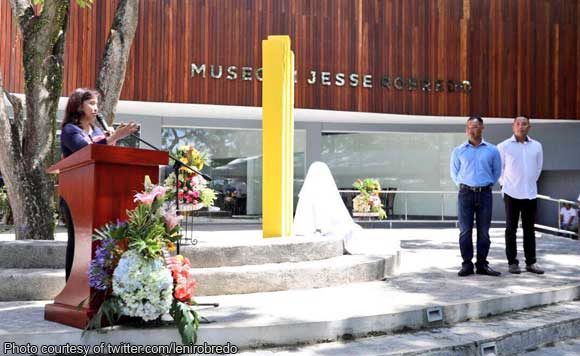 Sentimental, Vice President Leni Robredo posts a grayscale photo of her holding a necklace probably given by the late interior secretary Jesse Robredo.

The photo did not show her face, only her golden ring and priced necklace.

Among these activities include VP Robredo’s launching of the INP at the recently opened Robinsons-Place, the biggest mall in Naga City.

Also present to commemorate is Kiko Pangilinan who joined the VP in the “Freedom Cycle: Pedal Like Jesse,” biking activity which aims to encourage discussion on freedom and innovations.

Robredo and the National Historical Commission of the Philippines (NHCP) also led the opening of the Jesse M. Robredo Museum at the Naga Civic Center.

With VP @lenirobredo for “Freedom Cycle: Pedal Like Jesse,” which aims to encourage the public to join discussion on freedom & innovations. pic.twitter.com/p2gMNCNYXc