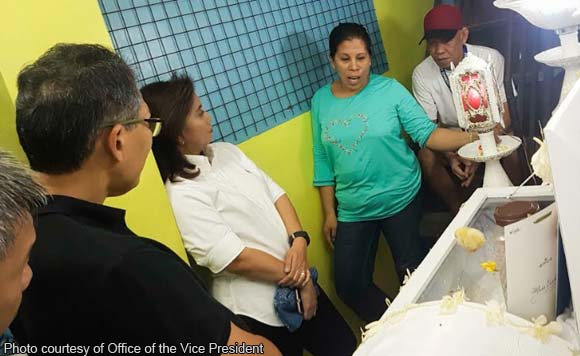 Vice President Leni Robredo has offered assistance to the parents of Kian Loyd Delos Santos, the 17-year-old student who was shot dead by the police in anti-drug operations in Caloocan City last week.

Robredo made the offer during her visit to Delos Santos’ wake Sunday (August 20) in Barangay 160 in Caloocan.

She was accompanied in the visit by lawyer Jose Manuel “Chel” Diokno, national chairman of the Free Legal Assistance Group (FLAG), a leading national organization of human rights lawyers.

Robredo, who went straight to Delos Santos’ wake from Naga City, said she empathizes with Delos Santos’ parents since is a mother with a teenage daughter.

The Vice President said that while she has experienced how to lose a loved one when her husband, former Interior Secretary Jesse Robredo, died, she can only fathom how hard it was for Delos Santos’ parents to lose their son.

Police claimed they shot Delos Santos because he fired at them while the anti-drug operations were happening on the evening of August 16.

However, surveillance footage and eyewitness accounts showed the teenager was mercilessly dragged into a dark alley by policemen wearing casual clothes.

A witness said Delos Santos was punched repeatedly by the cops before he was told to run and fire a gun.