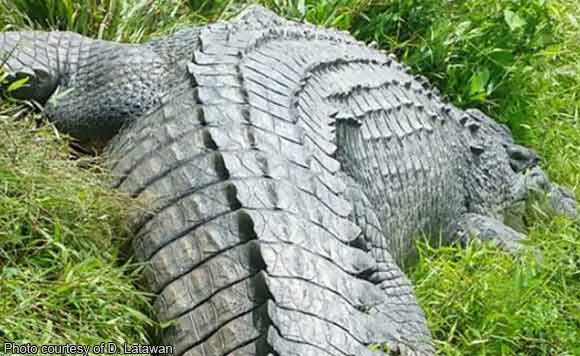 Crocodile sightings have been reported in Barangay Rabor, Balabac, and the most recent was on Saturday, where one was seen trudging through the grass 200 meters away from the Rabor Elementary School in the town of Balabac.

The crocodile was seen by a public school teacher Dionisio Latawan while walking to school with a co-teacher.

“Thank u (sic) Lord for always keeping us safe. Meet our neighbors,” Latawan posted on his Facebook account to refer to the crocodile. He also posted a selfie with the animal.

Latawan said he was particularly concerned about his students, who regularly travel to the elementary school by sea. “Other students who come to school by sea are scared. When it’s high tide, the crocodiles go up to the dry land,” the public teacher said.

In response to the call, the Palawan Council for Sustainable Development (PCSD) told residents to be careful and be on alert against crocodile attacks. Frequent sightings may be due to the reptile’s hunt for food and the destruction of their habitat.

PCSD Staff spokesperson Jovic Fabello also warned residents not to hurt and not to hunt the protected wildlife.

The spiked tail of the saltwater crocodile spotted in Balabac town, southern Palawan. (Photo by D. Latawan)
“What we need to do is to be careful and to strengthen the information and education campaign to ensure the safety of the residents,” said Fabello.

Saltwater crocodiles can not stay long underwater, particularly if their habitat mangrove areas are flooded during high tide, he explained.

The saltwater crocodile is the largest of all living reptiles in the world.

In May this year, a four-foot saltwater crocodile was caught in a fish pen by a fisherman in Rizal town, also in southern Palawan. (PNA)