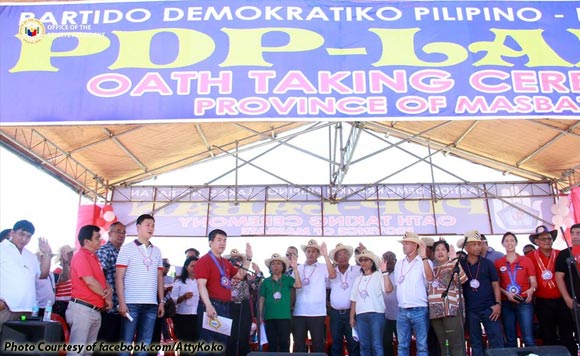 Masbate’s rival politiko clans, Espinosa and Kho have decided to kiss and make up after Governor Antonio Kho joined 35,000 others in a mass oath-taking of new members of the Partido Demokratikong Pilipino-Lakas ng Bayan (PDP-Laban) at the Masbate Sports Arena last Sunday.

Mario Espinosa, PDP-Laban Deputy Secretary General for Bicol, made amends with the family’s political arch-rival, Kho, after the latter brought his leaders and supporters to join the PDP-Laban party.

Espinosa, a former Masbate vice governor, was on the verge of tears when he narrated how his family members became victims of intense political rivalries that even claimed the lives of his father Moises, brother Moises Jr., and uncle Tito.

“I asked Gov. Kho that I will support his political career provided you give me a free hand in doing business in the province,” Espinosa said.

Senate President Koko Pimentel said that when Kho approached him to signify his intention to join the PDP-Laban, he told Kho to consult with Espinosa, who immediately gave a thumb up sign.

Pimentel, reacting to the unification message of Espinosa, said that the scenario was the same formula that Duterte used in Davao when he was the mayor. He once told businessmen, “ibigay ninyo sa akin ang pagpatakbo ng Davao at kayo na ang bahala sa pagnenegosyo.”

Masbate, one of the two island provinces in Bicol, is a major election hotspot due to intense political rivalries among political clans such as the Espinosas, Khos, Seachon-Lanetes, and the Bravos.