Koko gathers 35k in PDP-Laban oath-taking in Masbate; dares Bebot to top that in Davao 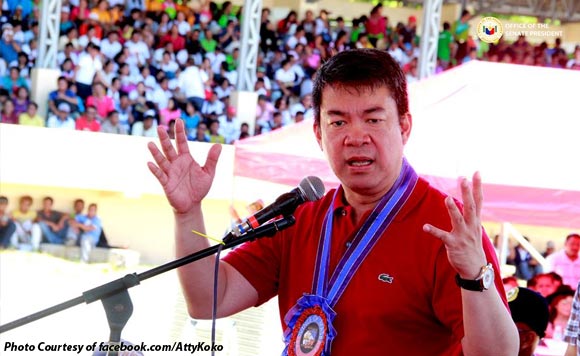 0 638
Share
Want more POLITIKO News? Get the latest newsfeed here. We publish dozens and dozens of politics-only news stories every hour. Click here to get to know more about your politiko - from trivial to crucial. it's our commitment to tell their stories. We follow your favorite POLITIKO like they are rockstars. If you are the politiko, always remember, your side is always our story. Read more. Find out more. Get the latest news here before it spreads on social media. Follow and bookmark this link. https://goo.gl/SvY8Kr

The huge number of political leaders from the Governor to House House members to local leaders from 21 cities and towns and 550 villages converged as early as 6 a.m. Sunday at the province’s sports arena .

“The 35,000 strong new party members in Masbate is a record breaking event for the party – this has outnumbered the oath-taking ceremonies held in other provinces,” Pimentel said.

Pimentel said he would report this record breaking event to House Speaker Pantaleon Alvarez who will hold on August 28 a mass oath-taking ceremony in his home region of Davao. “This would be a challenge for the Speaker,” he said.

Pimentel said the united effort of political leaders with diverse agenda indeed makes the party a “Super Majority” not only in Congress but also in the whole country.

“The unification in Masbate will make the province a shooting star for the next story of LGU development in the Philippine history,” the Senate president said. (Mar Arguelles/PNA)