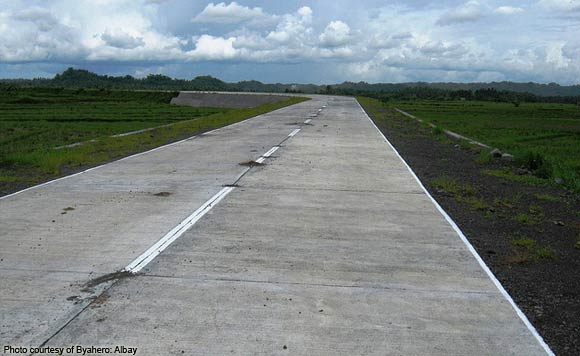 Albay Rep. Joey Salceda is lobbying the he Department of Transportation (DOTr) to allow the construction of Bicol International Airport in Daraga tafter it was put on hold despite President Rodrigo R. Duterte’s approval.

Salceda said DOTr’s non-issuance of notice to proceed for the construction of the P4.8-billion international airport has been delayed again and might not be completed in the next three years target of the government.

“During the budget hearing we will know why it was delayed again because there was a “notice of award” but no “notice to proceed”. The notice of award was issued on March 1,” Salceda said.

President Duterte led the groundbreaking ceremony of the Bicol International Airport on December 2016 where he vowed to finish the construction within three years “without corruption.”

“Somebody from DOTr is answerable for the delay of the construction,” he said. During the groundbreaking ceremony here, Duterte said the completion of the international airport in Bicol will boost the region’s economy and nearby regions as it will bring in more tourists to the countryside and spawn development.

He said the project will increase economic development in the regionwith Cebu Pacific management planning to make Bicol International Airport as its hub and staging point for Visayas and Mindanao regions..

The scope of work was confined to the airside facility project while that for the structures at the landside area is being worked out.

Since the inception of Bicol International Airport, the government spent at least P1.6 billion for the acquisition of lands and the construction of a 2.1-kilometer runway. The airport is located at Barangay Alobo in Daraga town and lies in a 148-hectare area with a 2,100-meter runway strip. It will be equipped with night landing capability and take-off facilities, control tower, passenger and cargo terminal, car park, fire station, and other modern facilities.

Albay Governor Al Francis Bichara asked the DOTr to revise the original plan of the Bicol International Airport to make it compliant with international standards.

Unfortunately, the implementation of the airport project in Bicol has been overdue for 12 years now. The project is a flagship program of then President now Pampanga Representative Gloria Macapagal Arroyo and was carried on during the presidency of Benigno Aquino III and now by President Rodrigo Duterte. (PNA)