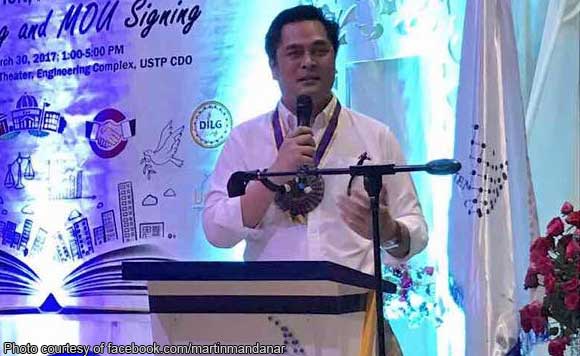 Presidential Communications Operations Office (PCOO) Secretary Martin Andanar on Friday held a dialogue with residents of barangay Puro a coastal village here aimed to open up direct communication lines between the government and the community.

Andanar, speaking to the residents, said he hopes to show that the government is sincere by directly communicating with the people, hearing their concerns and possibly addressing their needs.

“We are here to bring the President’s message to the people, so in my simple way allow me to be your messenger to the President, he said.

Andanar said the dialogue with the community led by village chief Nicasio Barrios Jr. has solicited various concerns ranging from livelihood training, repair, and improvement of the school classroom and other social and health issues.

The dialogue dubbed as “Kumpas Barangay” is a community-based forum organized by the PCOO as a platform to know various needs and concerns evolving in remote villages.

Since the beginning of this year, PCOO has been holding roadshows all over the country to discuss government programs and services to the various sector of the community.

Barangay Puro is a coastal village three kilometers away from the city proper.

“This forum aims to show that the government wants to speak to the people directly,” Andanar added.

Rolando Apin, a Person with Disability (PWD) at the forum sought government assistance by conducting handicraft training through the use of recycled garbage materials.

Andanar in addressing the PWD concern said he would bring this matter to Technical Skills Development Authority (TESDA) Secretary Guiling Mamondiong so that his agency could hold a handicraft training with the use of materials from garbage.

Ma Joy Pinat, a public school principal reported the lack of funds for the repair of the Puro Elementary School classrooms.

Andanar said, ” I will personally bring this to Secretary Leonor Briones of the Department of Education (DepEd) so that the fund may be release for the renovation of school buildings, we will be having a cabinet meeting on Monday.”

More concerns cropped up at the dialogue these include Napoleon Lopez-Venus representing the Senior Citizens requesting for additional benefits for SC; Antonio Barrameda Sr. a representative from fishermen group asking for a “banka” to be used for fishing.