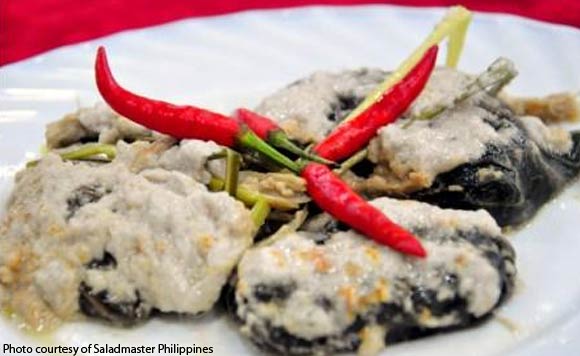 ‘Pinangat’, one of Albay’s outstanding ethnic dishes that have been making waves in world food expos, has bagged the 22nd spot in the Top 50 World Street Food Masters list at the recently concluded World Street Food Congress (WSFC) 2017 in Manila.

Aside from its intrinsic savory taste, the pinangat’s success is partly credited to Albay 2nd district Rep. Joey Salceda’s 2D Culinaria initiative that focuses on food and travel, and supports ethnic cuisines and local food producers.

The 2D Culinaria Albay program was derived from the original Culinaria Albay, which significantly enhanced the local food industry and opened new avenues for small and medium food producers and entrepreneurs in the province. On account of its successful participation in past international food expos, the Department of Tourism has tasked 2D Culinaria Albay to represent the Bicol region in the May 31-June 4 WSFC held at the Mall of Asia in Pasay City.

The WSFC has been acclaimed as a resounding success, and local entrepreneur Zeny’s pinangat of Camalig town in Albay made it to the 22nd spot in the Top 50 World Street Food Masters list. The pinangat is a concoction of pork or fish wrapped in taro leaves, and gently simmered in coconut milk.

Two native Albay dishes were presented during the WSFC — the Bicol Express risotto and the pinangat burger. Both merited good reviews and were included in the “10 things to try at WSFC” by Spot.ph; the “8 must-try dishes” by interaksyon.com; and the “7 local food picks” by ABS-CBN.

2D Culinaria Albay’s success at the WSFC followed its equally outstanding presentation last month at the IFEX Philippines, one of the country’s biggest international trade exhibitions.

Salceda has sustained his support for his province’s food industry through the Culinaria Albay brand and has urged Albayanos to patronize local products to support the native industry, and promote their chefs and homegrown restauranteurs in the global food arena.

The 2D Culinaria Albay has also joined the Madrid Fusion Manila food exposition last April 6-8 at the SMX Mall of Asia, after which three international chefs and food writers from Russia, London and the Middle East visited Albay and Sorsogon as their post-expo destination, a validation that Culinaria Albay is on the right track, said Salceda.

The Madrid Fusion food expo was among Albay’s most notable and productive participation in food expos, where buyers — having been familiarized with the Albayano ethnic tastes in previous events — showed astounding interest in Albayano cuisine.

In recent years, Albay has been acknowledged and conferred various awards for its culinary tourism and its notable global tourism assets that have drawn international tourists in droves.