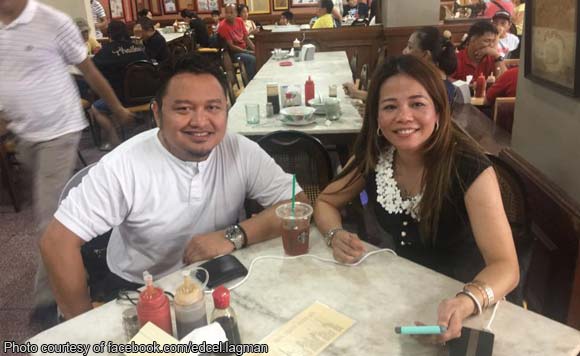 0 659
Share
Want more POLITIKO News? Get the latest newsfeed here. We publish dozens and dozens of politics-only news stories every hour. Click here to get to know more about your politiko - from trivial to crucial. it's our commitment to tell their stories. We follow your favorite POLITIKO like they are rockstars. If you are the politiko, always remember, your side is always our story. Read more. Find out more. Get the latest news here before it spreads on social media. Follow and bookmark this link. https://goo.gl/SvY8Kr

How could a Chinese businessman like Ma Mon Luk become a Philippine icon?

Foodie and former Albay congressman Grex Lagman explains why on this Facebook upload which shows him and his wife Quezon City Councilor Ivy Lagman chowing down at the old restaurant named after the foreigner.

“A schoolteacher from Guangdong Province, he sailed to Manila to make his fortune in the 1920s. He would peddle his noodles like a taho (soybean curd) vendor tirelessly in Quiapo until one of his clients agreed to rent out a small stall to him. His noodles eventually became very famous because of his industry and gastronomic ideas,” Grex wrote.

“With his new wealth, he was able to go back to China and marry his one true love–a beautiful and rich Cantonese girl whose family initially disapproved of Ma’s social status. They returned to the Philippines for good and became naturalized Filipino citizens,” he further narrated.

Grex ended his post by saying, ” Ma Mon Luk, an iconic Filipino.” And that’s not just the noodles talking, but also Filipino pride.

VP Robredo thanks Filipinos in the Hague for show of support