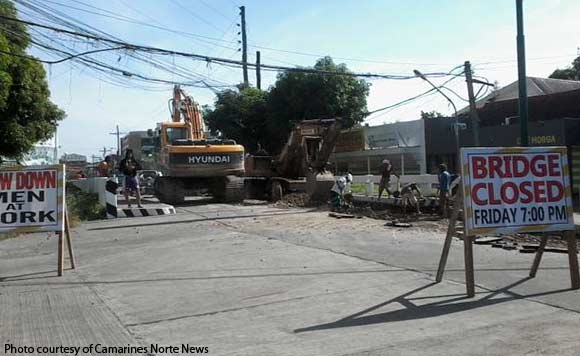 0 1,778
Share
Want more POLITIKO News? Get the latest newsfeed here. We publish dozens and dozens of politics-only news stories every hour. Click here to get to know more about your politiko - from trivial to crucial. it's our commitment to tell their stories. We follow your favorite POLITIKO like they are rockstars. If you are the politiko, always remember, your side is always our story. Read more. Find out more. Get the latest news here before it spreads on social media. Follow and bookmark this link. https://goo.gl/SvY8Kr

Phase 1 and 2 of the construction of Labo Bridge no. 2 in the province of Camarines Norte are both over halfway finished, District Engineer Ricardo Gutierez said.

This was bared in a Brigada News FM Daet report Saturday (May 20) after Labo Mayor Joseph Ascutia slammed the Department of Public Works and Highways (DPWH) for its very slow work on the project.

Gutierez said that Phase 1, which is being handled by RC Tagala Construction, is purportedly 60 percent done.

Meanwhile, Phase 2, the contractors of which are RC Tagala and Bemkar Construction, is also said to be 60 percent finished.

That said, it still seems very unlikely that the bridge would be completely finished this year, as what has been promised by the local DPWH to Ascutia.

The politiko castigated the DPWH over the slow bridge construction during a recent League of Municipalities-Camarines Norte Chapter meeting.

It should be noted that there is a third phase in the construction of the bridge, which according to authorities was hindered by right-of-way problems.

Over P228.2 million has been poured into the project.