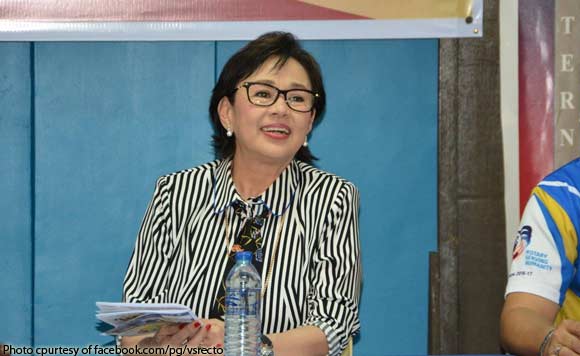 0 597
Share
Want more POLITIKO News? Get the latest newsfeed here. We publish dozens and dozens of politics-only news stories every hour. Click here to get to know more about your politiko - from trivial to crucial. it's our commitment to tell their stories. We follow your favorite POLITIKO like they are rockstars. If you are the politiko, always remember, your side is always our story. Read more. Find out more. Get the latest news here before it spreads on social media. Follow and bookmark this link. https://goo.gl/SvY8Kr

AKO Bicol Party-list Rep. Rodel Batocabe called on the House leadership to quickly fill the vacant chairmanship of the Committee on Civil Service and Professional Regulation, if only to hasten the passage of a pet bill.

“We want a workplace free from any forms of discrimination and judgment, unmindful to race, ethnic origin, religion, sexual orientation, gender identity, social status, age, and political beliefs,” said Batocabe , president of the Party-List Coalition in the House of Representatives (HOR).

“Bullying in the workplace is often overlooked and unheeded by organizations, human resource managers and administrative personnel until it results to irremediable damage to our workers,” he noted.
The bill has been pending in the Committee on Civil Service and Professional Regulation since July of 2016.

However, the chairman’s seat has been empty since the removal of Batangas 3rd district Rep. Vilma Santos-Recto.

Former actress Santos-Recto was removed as chair for her opposition to the death penalty restoration bill last March.

“We are hoping that the House leadership can fill the vacancy of chairmanship for the Committee on Civil Service and Professional Regulation so that we can proceed with the matters of the Committee and discuss the bill at the soonest possible time,” Batocabe said.

“We hope that the chairperson will be elected as soon as possible.”

The bill calls for the adoption of anti-office bullying policies that would direct government, non-government offices, and business establishments to address the problem of office-bullying that often results to reasonable fear of physical or emotional harm and damage to people.

If enacted, the legislative measure will penalize acts that result to physical harm, damages directed to emotional and moral well being, unfounded accusations by profanities and foul languages, and the use of technology to lay harm on a person’s reputation or character.