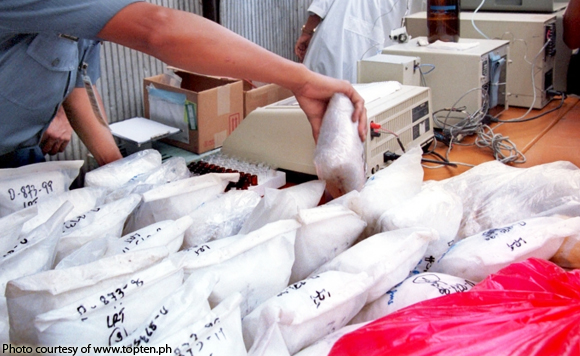 0 910
Share
Want more POLITIKO News? Get the latest newsfeed here. We publish dozens and dozens of politics-only news stories every hour. Click here to get to know more about your politiko - from trivial to crucial. it's our commitment to tell their stories. We follow your favorite POLITIKO like they are rockstars. If you are the politiko, always remember, your side is always our story. Read more. Find out more. Get the latest news here before it spreads on social media. Follow and bookmark this link. https://goo.gl/SvY8Kr

Who says there are no illegal drugs in Camarines Sur?

Two brothers who are the sons of a retired police officer were arrested Sunday night(March 19) for carrying P5.6 million worth or “shabu.”

A Bicol Standard report Monday (March 20) identified the suspects as Macneil Abines and Christian Abines, who were described as “major drug dealers” in the province.

Sources said that their father, SPO2 Reinier Abines, is the bodyguard of a local politiko.

Over a kilo of shabu was confiscated. It is said that after President Rodrigo Duterte launched his aggressive anti-narcotics campaign last year, the street value of illegal substances shot up due to scarcity.

The Abineses later admitted that they supplied illegal drugs to the towns of Minalabac, San Fernando, Pasacao, Pamplona, and Libmanan, among others.

PDEA conducted the operation by virtue of a search warrant issued by Executive Judge Pablo Formaran of the Naga City Regional Trial Court.