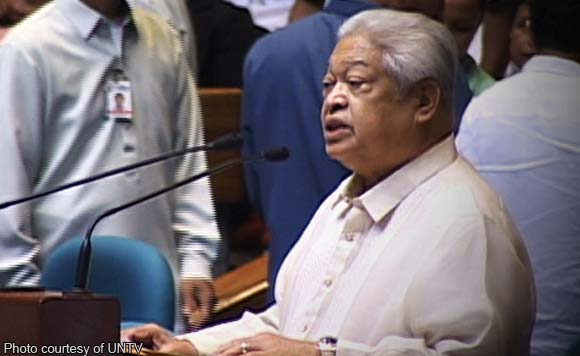 Albay 1st district Rep. Edcel Lagman took great exception to the supposed “gagging” of the House leadership on the 50 or so congressmen who want to interpellate or debate on the controversial death penalty restoration bill.

This began last week when interpellators were only given an hour on the floor to speak against the death penalty revival as embodied in House Bill (HB) 4727.

What earned earned the opposition solon’s ire is that this lone hour would be shared by the interpellators and sponsor, meaning the latter could theoretically give inordinately long answers.

“Gagging by indiscriminately and arbitrarily limiting an interpellator to a solitary hour to debate, which one hour unreasonably includes the time consumed by the answers of the bills’ sponsors,” Lagman said in a statement.

“This is a gross misconstruction and blatant misapplication of Sec. 91 of Rule XII which provides that ‘A Member shall not be allowed to speak for more than one (1) hour in debate on any question’,” he pointed out.

Lagman claimed that during In committee deliberations, it was “well settled that the time allotted for an interpellator does not include the time consumed by the Chair, a Member or a guest responding to the questions.”

House Speaker Pantaleon Alvarez has set a mid-March target for the passage of the measure, which he likes to say is being pushed by President Rodrigo Duterte himself. The House of Representatives (HOR) is scheduled to go on recess after that.

Observers said that the shared one-hour rule is intended to exhaust all 50 interpellators in time for the recess. #