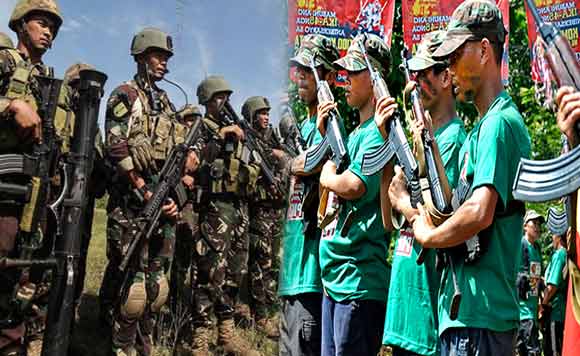 0 564
Share
Want more POLITIKO News? Get the latest newsfeed here. We publish dozens and dozens of politics-only news stories every hour. Click here to get to know more about your politiko - from trivial to crucial. it's our commitment to tell their stories. We follow your favorite POLITIKO like they are rockstars. If you are the politiko, always remember, your side is always our story. Read more. Find out more. Get the latest news here before it spreads on social media. Follow and bookmark this link. https://goo.gl/SvY8Kr

Don’t look now, but Albay 1st Rep. Edcel Lagman thinks that the “all-out war” between the Philippine government and Communist rebels could lead to the declaration of Martial Law by President Rodrigo Duterte.

Lagman claimed that the renewal of hostilities from both sides “will be giving incentive or fuel to attempts to declare Martial Law”.

“It will not only abrogate the peace process but it could also intensify a determination to declare Martial law based on the all out war against supposed rebels,” the veteran lawmaker told a press conference Tuesday, February 7.

That same day, the Department of National Defense (DND) declared an all out war against the Reds following the suspension of peace talks between the government and National Democratic Front (NDF).

“We remind the president that any declaration of Martial law should be based on the constitution and must respect the recent declaration of our people that they don’t want the revival of Martial Law,” Lagman said. #