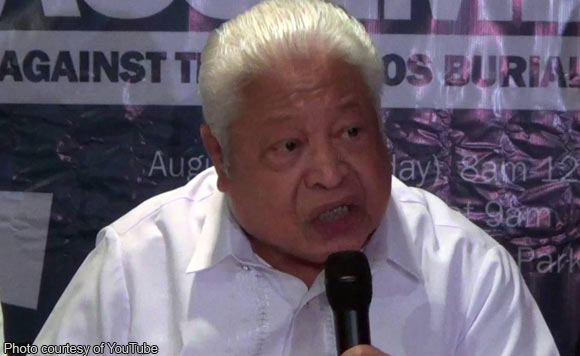 0 492
Share
Want more POLITIKO News? Get the latest newsfeed here. We publish dozens and dozens of politics-only news stories every hour. Click here to get to know more about your politiko - from trivial to crucial. it's our commitment to tell their stories. We follow your favorite POLITIKO like they are rockstars. If you are the politiko, always remember, your side is always our story. Read more. Find out more. Get the latest news here before it spreads on social media. Follow and bookmark this link. https://goo.gl/SvY8Kr

Albay 1st district Rep. Edcel Lagman is keeping a tight lid on their strategy against the death penalty restoration bill, which will be sponsored on the House floor Tuesday afternoon (January 31).

“It’s hard to tell media our strategy but we’re calling for a conscience vote. If it is a conscience vote, the death penalty will be vanquished,” Lagman, an opposition bloc member, confidently said in a press conference ahead of the floor debates.

The opposition has been leading the move to block House Bill (HB) 4727, which would reinstate capital punish in the country as per the wishes of President Rodrigo Duterte’s administration.

“There are 50 confirmed interpellators but we’ve submitted 25 already…they are from all parties, predominantly coming from the supermajority,” said Lagman, a Liberal Party (LP) member.

Asked about the exact number of votes they have, Lagman declined to answer since it would telegraph their punches. “But they are numerous,” he claimed.

He bared that Cebu City 1st district Rep. Raul Del Mar will get the first crack at the interpellations.

The Bicolano politiko could not say how long each interpellation will take but nonetheless expects an exhaustive debate.